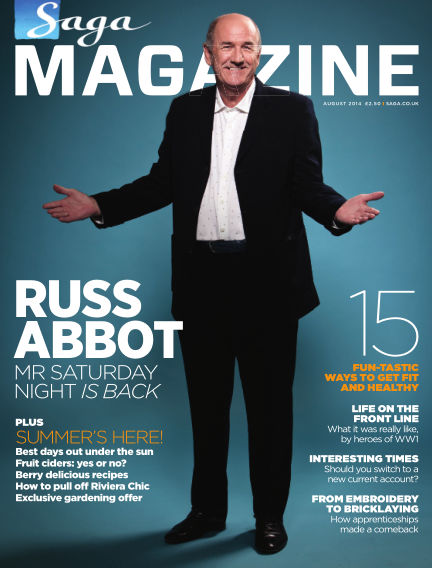 In this issue of Saga Magazine : We’ve packed everything under the sun into the August issue of Saga Magazine. Make the most of the summer weather with our round-up of the best days out, plus berry delicious recipes and refreshingly different fruit-flavoured ciders. Want to look cool when the heat is on? Bring Riviera chic bang up to date with a bright and breezy British accent.

One man who’s spread more than a little sunshine is Russ Abbot. The one-time musician and madcap comic is back on TV in Boomers, a new BBC sitcom with an all-star cast. His success, he claims, is simply down to a series of happy accidents. Also falling on their feet are more and more youngsters who are signing up for apprenticeships; we meet the mentors passing on their skills to a younger generation. Inter-generational concerns are high on actress Phyllida Law’s radar, too. The mother of Emma and Sophie Thompson may seem delightfully dotty but, having cared for her mother who had dementia, she has down-to-earth ideas about what she expects of her own daughters down the line.

To commemorate the start of the First World War, we have heart-rending reminiscences from those who were on the front line, thanks to leading military historian Richard van Emden. These, for him, are ‘the most memorable witnesses to the war that changed the world for ever’. If you’re in need of a little light relief after that, you can marvel at the chic sheep and prize porkers carrying off prizes for rare and traditional livestock breeds at our county shows. All this, plus our unrivalled coverage of the arts, money, health, gardening, travel, and all the things that matter to the over-50s.

With Readly you can read Saga Magazine (issue August 2014) and thousands of other magazines on your tablet and smartphone. Get access to all with just one subscription. New releases and back issues – all included.
Try Readly For Free!
Saga Magazine