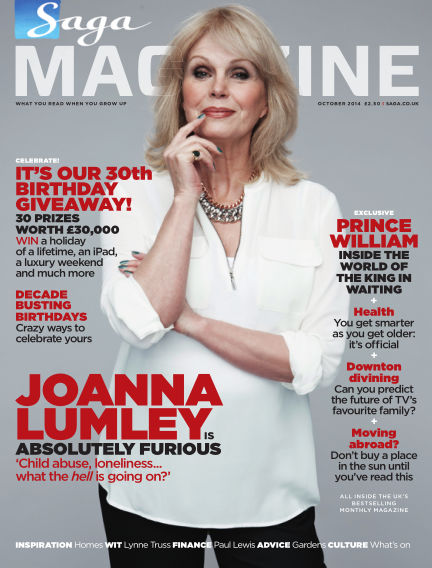 In this issue of Saga Magazine : The October issue marks our 30th birthday, and to celebrate we’re giving you presents worth £30,000 over the next three months. Enter our great giveaway to win a holiday of a lifetime to California and the Golden West, an iPad Air, a Warner weekend break and much, much more. Prince William, aged two, was on our first cover, so we glance back at his life and look forward to what the future has in store for ‘the people’s prince’.

Was life really better back in the good old days of 1984? We’ve removed our rose-tinted specs to find out, and our conclusions may surprise you… We’ve also picked the best quotes from the many famous faces who’ve appeared in Saga Magazine over the past 30 years. We’ve had fun compiling our anniversary edition but, for our readers, the sky’s literally the limit when it comes to decade-busting birthday celebrations. Meet the grandmother who celebrated her 80th by doing a tandem skydive jump, and the climber who cut his 90th birthday cake on the summit of his favourite mountain.

Our cover star this month is Joanna Lumley, who’s absolutely furious. She’s in fine, forthright form, talking about the child-abuse scandals, the scourge of loneliness and the virtues of nosiness. If you liked Drop the Dead Donkey and Outnumbered, you’ll love our interview with co-writers Andy Hamilton and Guy Jenkin about their first feature film. Plus, we meet the enigmatic Mister Finch, a self-taught textile artist who conjures up fairy-tale creatures from scraps of fabric. Some of his creations are slightly spooky, but not half as spine-chilling as the ghost story, written by a 91-year-old reader, that has won our short-story competition. Curl up on the sofa, dim the lights and enjoy!

All that, plus our unrivalled coverage of the arts, money, health, gardening, food and drink, travel, and all the things that matter to the over-50s.

With Readly you can read Saga Magazine (issue October 2014) and thousands of other magazines on your tablet and smartphone. Get access to all with just one subscription. New releases and back issues – all included.
Try Readly For Free!
Saga Magazine