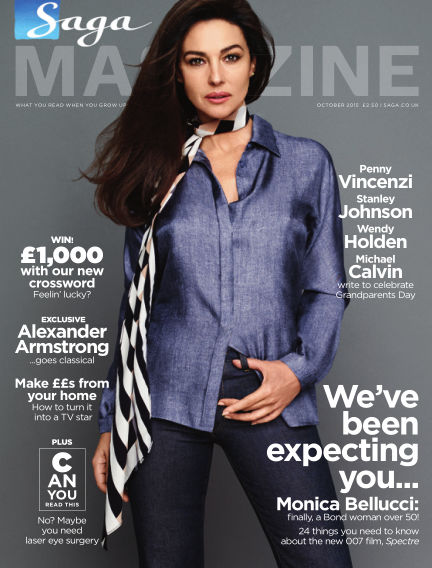 In this issue of Saga Magazine : October already? As the trees herald autumn with their glorious display of gold and amber hues, why not take a leaf out of our book and pen a letter to your grandchildren, passing on your hard-won wisdom? To celebrate Grandparents Day, which falls this month, we asked three well-known writers to do just that. Penny Vincenzi, Stanley Johnson (Boris’s dad), and sportswriter Michael Calvin’s advice – about following dreams, the importance of love and laughter, and not wasting too much time on housework – is sure to strike a chord. And Wendy Holden has penned a touching letter of gratitude to her Gran for valuable lessons learnt at her knee.

Young and old are also coming together, learning from one another and having fun, in intergenerational projects springing up around the country: meet a retired teacher picking up theatre skills from students, and the East-End Old Geezers introducing youngsters to the discipline of boxing.

We reveal Pointless presenter, Classic FM DJ and all-round funny man Alexander Armstrong is adding yet another string to his bow: he has just finished recording his debut album of classic British songs and is thrilled to be returning to his musical roots. And as SPECTRE returns to stop OO7 in his tracks in the 24th Bond film, we’ve got 24 fascinating facts to jog your memory about the evil brotherhood.

Also somewhat sinister are some of the exhibits recently unveiled to the public from New Scotland Yard’s Crime Museum (others, thankfully, are downright silly!), where every object tells a remarkable story. And every picture speaks volumes in a new book of EH Shepard’s watercolours and drawings from the front line during the First World War. Who knew the man famous for his Winnie-the-Pooh illustrations had served as a war artist?

And you may be surprised to find out that your home could be earning its upkeep if only you’d thought of renting it out to film and TV location companies. They’re particularly short of bungalows, apparently…

All this, plus our unrivalled coverage of the arts, money, health, gardening, food and drink, travel, and all the things that matter to you.

With Readly you can read Saga Magazine (issue October 2015) and thousands of other magazines on your tablet and smartphone. Get access to all with just one subscription. New releases and back issues – all included.
Try Readly For Free!
Saga Magazine