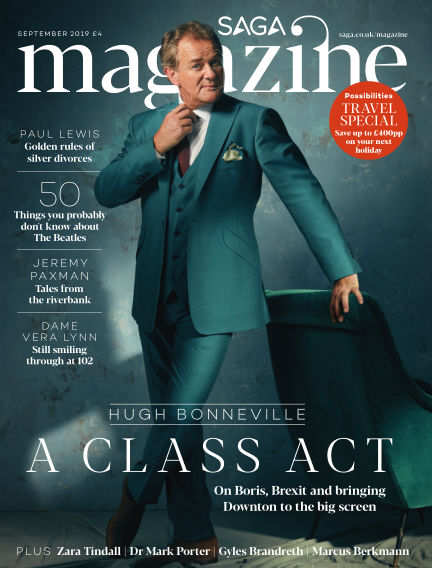 In this issue of Saga Magazine : As the long-awaited Downton Abbey movie is released, Hugh Bonneville, aka Lord Grantham, talks to us about the joy of reuniting with the rest of the cast for ten weeks of filming at Highclere Castle. Fast forward from 1920s Britain into the here and now, he also shares his opinions with us on Boris, Brexit and the future of our country.
For more nostalgia there’s our light-hearted backward glance at The Beatles. To coincide with the 50th anniversary of their last album Abbey Road, Henry Macrory has unearthed some trivia you probably haven’t come across before – including the fact that Paul was the only one with any academic qualifications.
If school seems but a distant memory to you, you’ll enjoy our account of three high-fliers who retrained as teachers in their fifties through Now Teach, an organisation set up to deal with chronic shortages in subjects such as maths, science and languages. It’s tough, it’s humbling, but all three agree it’s well worth it.
On other pages, Fred Pearce explains why we need to plant more trees and Val Bourne says organic gardening is not a new concept – we’ve been doing it for centuries.
All that, plus Jeremy Paxman, the beauty of Test cricket, the best fashion boots to buy, apps for your smartphone to help you manage your health, two prize crosswords, and a cheery ten minutes with Dame Vera Lynn. We hope you enjoy the issue!

With Readly you can read Saga Magazine (issue September 2019) and thousands of other magazines on your tablet and smartphone. Get access to all with just one subscription. New releases and back issues – all included.
Try Readly For Free!
Saga Magazine