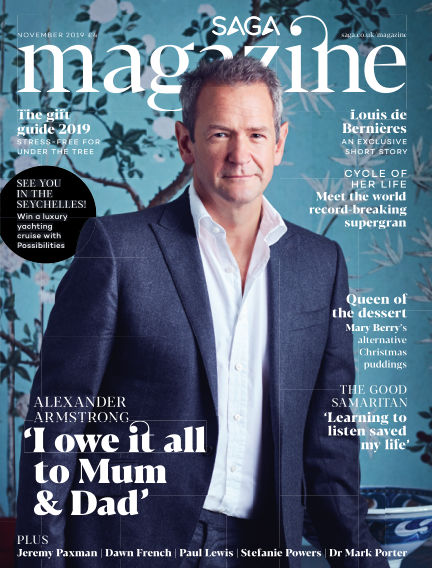 In this issue of Saga Magazine : In this month’s issue of Saga Magazine, we meet the Armstrong family. Best known as the presenter of the popular TV show Pointless, Alexander tells us that both his sense of fun and work ethic come from his mum and dad.
We also speak to Mark ‘Billy’ Billingham, star of Channel 4’s SAS: Who Dares Win who has recently published his memoir. After an unpromising childhood, Billy joined the Marine Cadets aged 17 where he learned to channel his wild energy. He was later selected for the SAS and was decorated for bravery.
If you’ve ever been made redundant, you will be interested in reading Sue Peart’s uplifting story. After many years working as an editor of a magazine, she found herself out of a job and in the depths of depression. Discover how she found a new sense of purpose by working for Samaritans.
All of this, plus, Mary Berry’s delicious festive desserts, a short story with a twist in its tail by Louis de Bernières, the supergran who cycled from Land’s End to John O’Groats to raise money for cancer and all our regular columnists.
Enjoy!

With Readly you can read Saga Magazine (issue November 2019) and thousands of other magazines on your tablet and smartphone. Get access to all with just one subscription. New releases and back issues – all included.
Try Readly For Free!
Saga Magazine