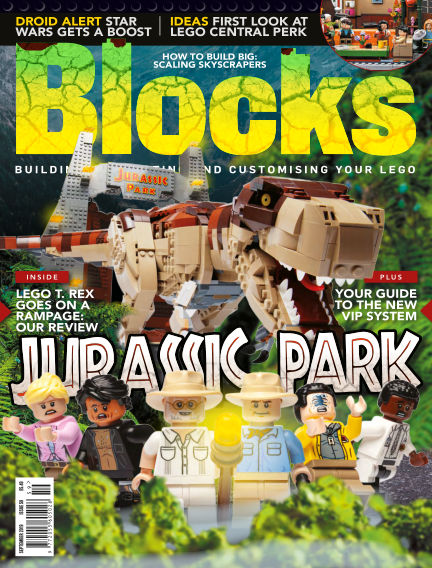 In this issue of Blocks Magazine : WHEN THE LEGO Group launched its first wave of official Jurassic World sets in 2015, the question on everyone’s lips was obvious: when are we going to get Jurassic Park sets?

The answer ended up being ’2018’, with the release of 75932 Jurassic Park Velociraptor Chase. But the diminutive build wasn’t enough to satisfy
die-hard fans. In steps 75936 Jurassic Park T. rex Rampage. Nobody would dare argue that this formidable beast deserves to be our cover star this month – at least not to its face, anyway. You can dive into our review of the already iconic set on page 34.

If the official set somehow doesn't float your boat, though, you might want to check out Richard Van As’s seriously impressive incarnation of the
same dinosaur on page 100. And unlike the LEGO Group, he’s had free reign to throw in the legendary Ford Explorer.

We’re talking more than just dinos this issue, of course – among these 112 pages, you’ll find an in-depth look at Star Wars BOOST, a stat attack on
LEGO set prices over the years, a guide to scaling skyscrapers, and so much more besides. That’s right: we spared no expense.

With Readly you can read Blocks Magazine (issue Sept 19 Issue 59) and thousands of other magazines on your tablet and smartphone. Get access to all with just one subscription. New releases and back issues – all included.
Try Readly For Free!
Blocks Magazine
SILVERBACK PUBLISHING LTD
Tweet