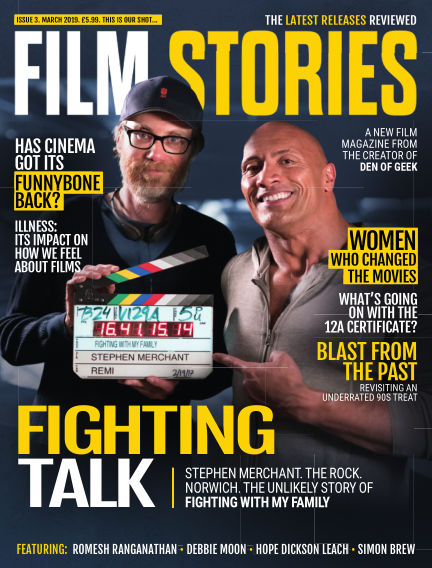 In this issue of Film Stories Magazine : The unlikely story of how Tooth Fairy led to The Rock backing a film about a family from Norwich. One that ended up with Stephen Merchant, who knew nothing about wrestling, directing a wrestling match.

How getting a serious diagnosis affects feelings towards movies
Celebrating the women who changed cinema, whose names aren’t always easy to find in the history books

The bizarre unofficial line in Nicolas Cage merchandise. Er, a bit odd, this one.

The 12A certificate, and the latest BBFC changes

The (nearly) forgotten films of Amblin. *batteries not included, anyone?

Talking of nearly forgotten films, we celebrate the 20th anniversary of Blast From The Past

How the Hollywood comedy has sprung back to life, and the films leading the charge

Why is cinema such a sod to the town of Grimsby?

The directors who left Hollywood behind (and not always by choice)

With Readly you can read Film Stories Magazine (issue Issue 3) and thousands of other magazines on your tablet and smartphone. Get access to all with just one subscription. New releases and back issues – all included.
Try Readly For Free!
Film Stories Magazine
SIMON BREW LIMITED
Tweet