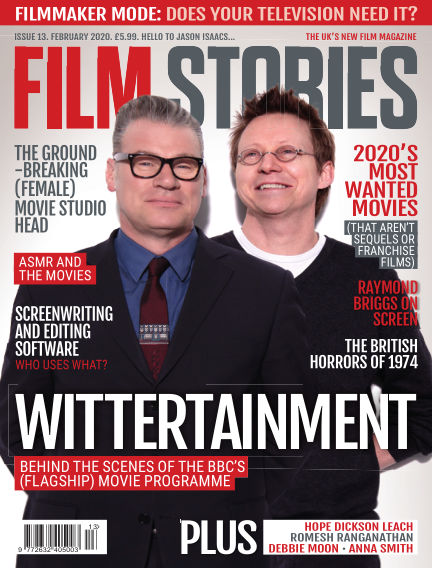 In this issue of Film Stories Magazine :
Behind the scenes of Wittertainment: just how does the world-conquering Kermode & Mayo Film Review programme come together?
What screenwriting and editing programmes do the pros use, and what are the worthwhile low cost alternatives?


Filmmaker mode: what is it, and does your telly really need it?
The ground-breaking (female) studio executive of the 1980s
Franchises not included! The 2020 movies to watch out for, that don’t have Roman numerals or colons in the title
The DVD and Blu-ray labels working to keep the special edition release alive


The shlock-horror double bill of British cinema in 1974
Amblimation: the story behind Steven Spielberg’s attempt to do battle with Disney animation
ASMR in the movies
Scandinavian composers: we talk to some of the musicians whose work is influencing movies more and more
Plus lots of reviews, news features, bits of mayhem and our regular Gerard Butler-themed quiz

With Readly you can read Film Stories Magazine (issue Issue 13) and thousands of other magazines on your tablet and smartphone. Get access to all with just one subscription. New releases and back issues – all included.
Try Readly For Free!
Film Stories Magazine
SIMON BREW LIMITED
Tweet