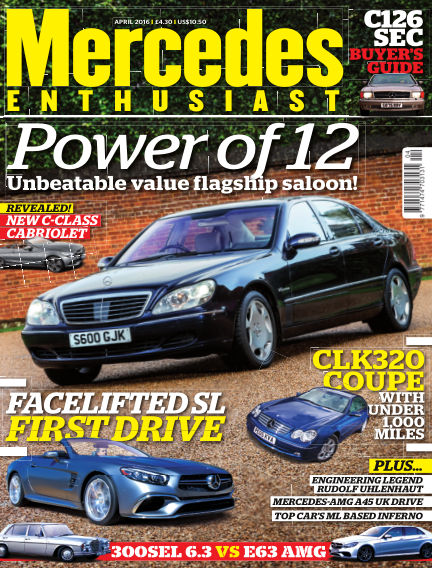 In this issue of Mercedes Enthusiast : Star Car: Read our first impressions of the facelifted SL on its international launch event in the United States.
Take Two: A new AMG E63 is not far away, so we compare the current one to a spiritual predecessor, the 300SEL 6.3.
Used Road Test: Costing its first owner over £100,000, this V12 biturbo powered S600 L is now under 14 grand.
Spotlight: Feast your eyes on the time warp condition of this CLK320 Coupe with less than 1,000 miles on the clock.
Road Test: While the rest of central London sleeps, we put Mercedes-AMG’s new 376bhp A45 to the test.
Profile: As fast as Mercedes’ best Silver Arrow racers and an engineering genius, Rudolf Uhlenhaut was a one-off.
Classic Choice: This manual gearbox equipped W111 300SE Coupe proves classic Mercs can be used regularly.
Tuner Car: Russian company Top Car shows off its ML based Inferno bodykit and reveals a host of engine upgrades.

With Readly you can read Mercedes Enthusiast (issue April 2016) and thousands of other magazines on your tablet and smartphone. Get access to all with just one subscription. New releases and back issues – all included.
Try Readly For Free!
Mercedes Enthusiast