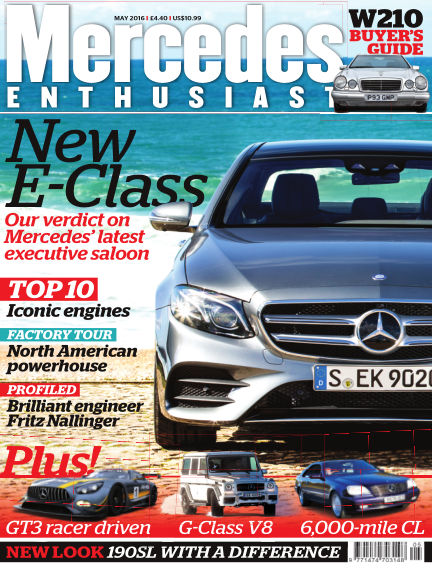 In this issue of Mercedes Enthusiast : Star Car: We drive the new E-Class saloon in four cylinder diesel and six-cylinder petrol forms.
Motorsport: As the latest racing car from Mercedes-AMG, the new GT3 has big boots to fill following the SLS.
Star Project: Rebuilt from the ground up, this 2001 G400 CDI boasts a superb Designo interior and much more.
Used Road Test: With under 7,000 miles on the clock, this 1997 CL420 feels as fresh as a daisy, and still goes well.
Top 10: Our pick of the most iconic engines manufactured by Mercedes-Benz during the last six decades.
Profile: Engineer Fritz Nallinger worked on some of the most recognisable Mercedes from the 1930s to 1960s.
Take Two: Can the new petrol-electric C350e be as entertaining to drive as a V6 petrol powered W204 C350?
Spotlight: We go behind the scenes at Mercedes’ Tuscaloosa factory in the US and reveal its future plans.

With Readly you can read Mercedes Enthusiast (issue May 2016) and thousands of other magazines on your tablet and smartphone. Get access to all with just one subscription. New releases and back issues – all included.
Try Readly For Free!
Mercedes Enthusiast