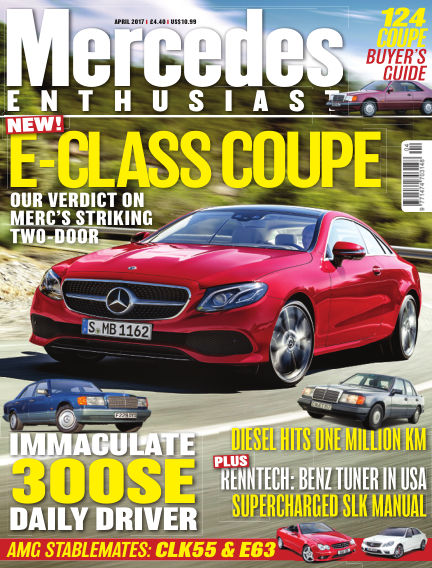 In this issue of Mercedes Enthusiast : Star Car: Read our verdict on the new E-Class coupe which starts from £40,135 and arrives in the UK this April
Youngtimer: What would you do with a 10,000-mile W126 300SE? This owner chose to use his example like a new car
Profile: We catch up with recently relocated tuner Renntech and test its stunning GT S and C63 on US roads
Ownership: Bought brand new in the early 1990s, this W124 200D has since covered over 600,000 miles
Take Two: Not content with a rare CLK55 AMG Cabriolet, this Benz fan then purchased a fully loaded E63 V8 biturbo
Motorsport: This 300SE Fintail was breathed on by AMG in the 1960s and now takes part in historic rallying events
Youngtimer: Values of R129 SLs are hardening, and cars like this super low mileage 500SL are the pick of the bunch
Spotlight: We jump aboard Ring Taxi’s AMG GT S for an adrenaline fuelled passenger lap of the fast Nürburgring
Technical: Ever wondered how you replace the upper wishbones and ball joints on a W211 E-Class? Then read on...

With Readly you can read Mercedes Enthusiast (issue April 2017) and thousands of other magazines on your tablet and smartphone. Get access to all with just one subscription. New releases and back issues – all included.
Try Readly For Free!
Mercedes Enthusiast