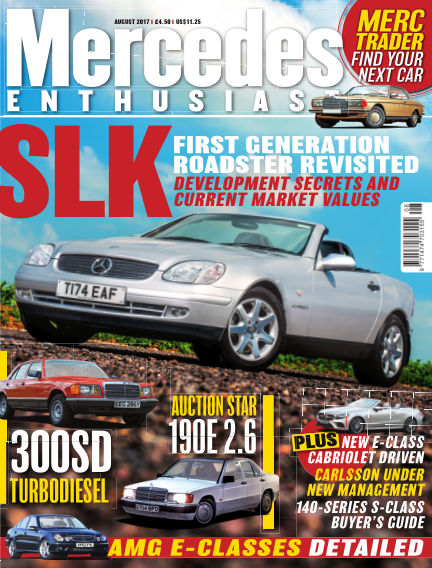 In this issue of Mercedes Enthusiast : Market Watch: Our mystery buyer considers the C126 SEC.
Merc Man: Spare your blushes with an online MOT check.
Inside Line: The great cabriolet debate.
First Drive: E-Class Coupe impresses in 400 V6 4Matic form.
Star Car: The new E-Class Cabriolet shows off its many talents on the twisting routes surrounding Mont Blanc.
Youngtimer: The 300SD Turbodiesel was a North American market special, but this Inca Red example never went there.
Spotlight: Launched in 1996, the original R170 SLK broke new ground for Mercedes and is now a bargain roadster.
Ownership: After buying this mint 190E 2.6 at auction, the owner then began digging into the car’s early life.
Take Four: Four generations of AMG E-Class dissected for your pleasure – you won’t believe how cheap some are!
Star Project: Once a complete wreck without a roof, this 220S Ponton Coupe has since been completely transformed.
Profile: Enthusiast driver and keen classic car collector, US musician Don Ricardo’s life was as colourful as they come.
Tuner Car: We catch up with the new owners of Carlsson and drive an S-Class Cabriolet based Diospyro and 190E C20.
Technology: Come behind the scenes at Mercedes’ factory in Kecskemét, Hungary – birthplace of the CLA.
Event: From the superbly restored to the seriously rapid, the Benz on the Green Mercedes meeting did not disappoint.
My Merc: Stunning CLA200 Coupe based in New Zealand.
Buyer’s Guide: 140-series S-Class saloons.
Running Reports: 190E 2.3, ML320 CDI/CLK63 AMG Coupe, W108 280SE.

With Readly you can read Mercedes Enthusiast (issue August 2017 ) and thousands of other magazines on your tablet and smartphone. Get access to all with just one subscription. New releases and back issues – all included.
Try Readly For Free!
Mercedes Enthusiast