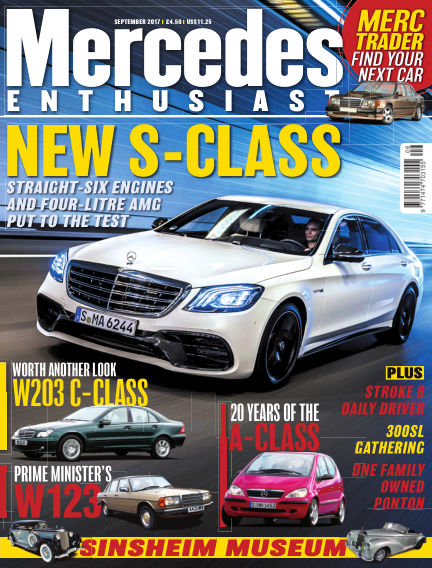 In this issue of Mercedes Enthusiast : Market Watch: Our mystery watcher considers the R107 SL.

Merc Man: How the C-Class became top dog in its class.

Inside Line: The pros and cons of Linguatronic.

Event: The exclusive 300SL Club gathered together almost 100 of its member cars at the Untertürkheim testing facility.

Classic Choice: This well-kept W115 230.4 from 1975 makes a superb daily driver for its enthusiastic keeper.

Spotlight: Looking back on Mercedes’ first generation W168 A-Class some 20 years after it was launched.

Profile: The Auto & Technik Museum Sinsheim in Germany is a paradise for fans of all things Mercedes-Benz.

Road Trip: After buying a C200 K, this owner travelled to Germany and drove the Bertha Benz Memorial Route.

With Readly you can read Mercedes Enthusiast (issue September 2017) and thousands of other magazines on your tablet and smartphone. Get access to all with just one subscription. New releases and back issues – all included.
Try Readly For Free!
Mercedes Enthusiast