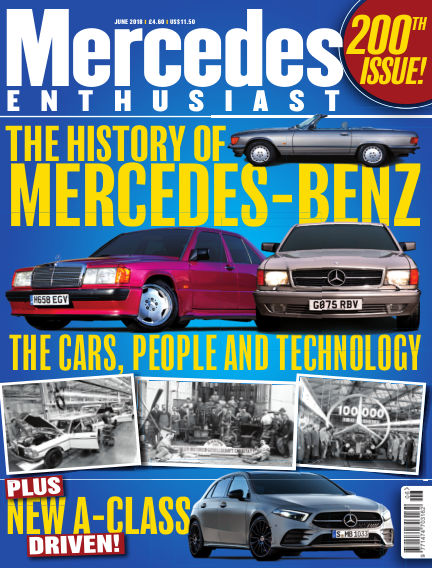 In this issue of Mercedes Enthusiast : News: A-Class saloon unveiled, Brabus founder passes away and a win for Mercedes in F1.

The History Of Mercedes-Benz:
Pre-War: Sowing the seeds of the greatest car manufacturer in the world.

1950s: Mercedes-Benz rebuilds itself from rubble after WW2.

1970s: Diesel power proves its worth and safety takes a front seat.

1980s: The genius of designer Bruno Sacco comes to the fore.

1990s: Daimler strikes partnerships in the USA and on German soil.

2000s: AMG powers into the spotlight as Merc’s reputation recovers.

2010-on: What it takes to become the top selling premium car maker.

Event: All the stars at this year’s amazing Techno Classica show in Essen.

With Readly you can read Mercedes Enthusiast (issue June 2018) and thousands of other magazines on your tablet and smartphone. Get access to all with just one subscription. New releases and back issues – all included.
Try Readly For Free!
Mercedes Enthusiast