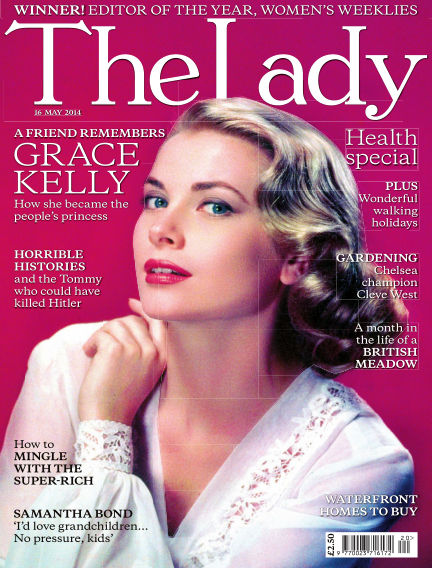 In this issue of The Lady : Dear Reader, It’s not easy being a princess. Really. For Grace Kelly it meant leaving behind the world she knew and moving to Monaco, which at the time was a far cry from the glamorous, cosmopolitan resort it is today. She had to learn French, make a home in a palace that hadn’t been lived in for years and, most importantly, win the hearts of her suspicious subjects. Kelly, however, had the common touch, making the switch from film star to adored royal with aplomb and, well, grace. As Nicole Kidman stars in a controversial new film about Grace Kelly’s time in Monaco, Grace’s friend and biographer, Jeffrey Robinson, tells me how she became the first people’s princess. We also have John Lewis-Stempel’s enchanting evocation of the ebbs and flows of an English meadow in May; Horrible Histories creator Terry Deary on education, vile Victorians and the British Tommy who could have killed Hitler, and the surprising award-winning images from one of the world’s most prestigious photography competitions. We reveal how to bring the super-rich down to earth; how to walk your way to health through some of the world’s most glorious destinations, and how to capture the elegant essence of the Duchess of Cambridge’s travelling wardrobe. And on page 51, you’ll find everything you need to keep your back and heart in tip-top shape. Very best wishes, Matt Warren, Editor

With Readly you can read The Lady (issue 16th May 2014) and thousands of other magazines on your tablet and smartphone. Get access to all with just one subscription. New releases and back issues – all included.
Try Readly For Free!
The Lady