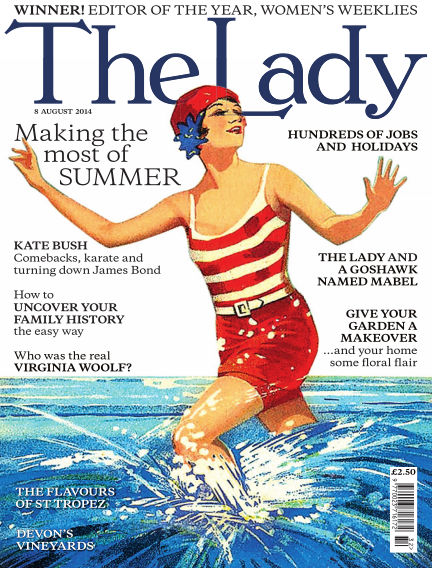 In this issue of The Lady : I have written a slightly different type of letter
this week. For as you may or may not know,
The Lady celebrates its 130th birthday next February,
a very proud moment indeed. Which has
got us thinking about how to mark the occasion.
Well, one rather wonderful idea was sent to me
by one of our subscribers, Jill Lewis. She suggested
that readers delve into their
family trees and uncover those lady relatives
who would have been alive when the magazine
was founded in 1885 (pictured right).
One of Jill’s ancestors was Rosina Twitchett
(commonly called Ena), an ‘Essex girl’ who was
born in 1860 and became a governess/nanny to
a wealthy family in Enfield. They were good
friends of another family called the Attlees, and
Ena often looked after their serious, delicate
and very bright little boy, Clement – who, in
1945, would become prime minister.
Perhaps you have similarly colourful family
yarns dating back to when The Lady was founded
by Thomas Gibson Bowles all those years ago. The magazine
does, after all, owe its longevity to its readers and The Lady’s story
is also very much your story. So start your research (there’s a
handy guide to genealogy on page 24) and send in your tales –
there will be more reminders in future issues – and we’ll publish
them in a very special 130th birthday feature early next year.
It promises to be quite an adventure… and who knows what you
might find.
Very best wishes,
Matt Warren, Editor

With Readly you can read The Lady (issue 8th August 2014) and thousands of other magazines on your tablet and smartphone. Get access to all with just one subscription. New releases and back issues – all included.
Try Readly For Free!
The Lady