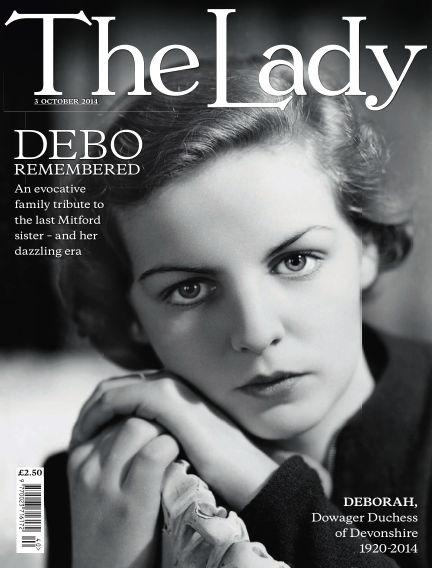 In this issue of The Lady : The Lady mourns. Last week, ‘Debo’, the Dowager
Duchess of Devonshire and the youngest
and last of the glamorous and often scandalous
Mitford sisters, died peacefully aged 94. Hers
was an incredible life.
Her father, David Freeman-Mitford, was an
offi ce manager of The Lady and married Sydney,
daughter of the magazine’s
founder, Thomas Gibson Bowles. The Mitfords
had six girls, including celebrated author, Nancy;
Diana, who went on to marry the British fascist
Oswald Mosley, and Unity, who developed an unhealthy
infatuation with Adolf Hitler.
Deborah, meanwhile, was the very essence of
elegance, glamour and wit. When her husband,
Andrew Cavendish, became 11th Duke of Devonshire,
she moved into the family’s Chatsworth
House – then in fi nancial peril – and transformed
it into the magnifi cent spectacle it is today.
Shrewd, clever, enthusiastic, she took to her new role with unforgettable
energy. She loved Elvis and her chickens and dogs, corresponded
with Evelyn Waugh and Patrick Leigh Fermor, danced
with John F Kennedy, and even wrote for The Lady. But she never
lost her approachability, her openness, her modesty.
She was beautiful, bold and authentic, as her cousin Julia
Budworth remembers in the fi rst of an evocative three-part series
on page 14. In many ways, her passing represents the end of an
era. She will be much missed.

With Readly you can read The Lady (issue 3rd October 2014) and thousands of other magazines on your tablet and smartphone. Get access to all with just one subscription. New releases and back issues – all included.
Try Readly For Free!
The Lady