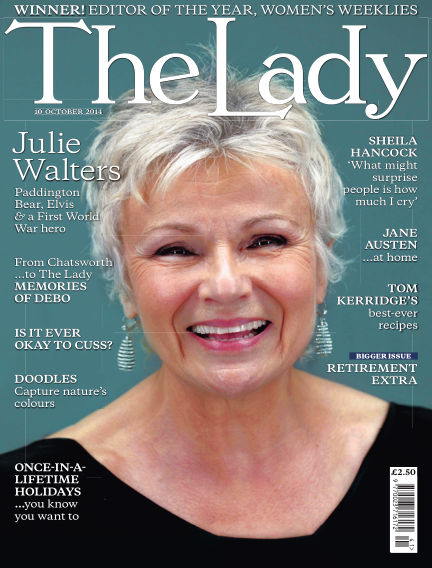 In this issue of The Lady : I first saw Julie Walters in Personal Services in
which she plays the lady in charge of une, ahem,
maison de rendez-vous. I was only 14 or 15 at the
time but there was something about Julie that
stood out: she was unconventional, charismatic,
a little cheeky. She was the real thing, a very
English star.
Of course, her career has gone from strength
to strength since then. This year, she has appeared in Effi e Gray
and the upcoming blockbuster Paddington, been awarded a
Bafta Fellowship and reportedly will soon
be the subject of a BBC Two tribute documentary.
There is even an online campaign
(or two) to make her a Dame, as we reveal on
page 14.
We also have part two of Julia Budworth’s
colourful tribute to Deborah, Dowager
Duchess of Devonshire, who died last
month; Melonie Clarke on the forgotten hero of the golden age of
musicals; a fascinating insight into Jane Austen at home, and dazzling
illustrations of the natural world, which you can bring to life
with some coloured pens and a little imagination.
And if you’d rather spend more time reading The Lady and less
time at work, don’t miss our retirement special section on page 51.

With Readly you can read The Lady (issue 10th October 2014) and thousands of other magazines on your tablet and smartphone. Get access to all with just one subscription. New releases and back issues – all included.
Try Readly For Free!
The Lady