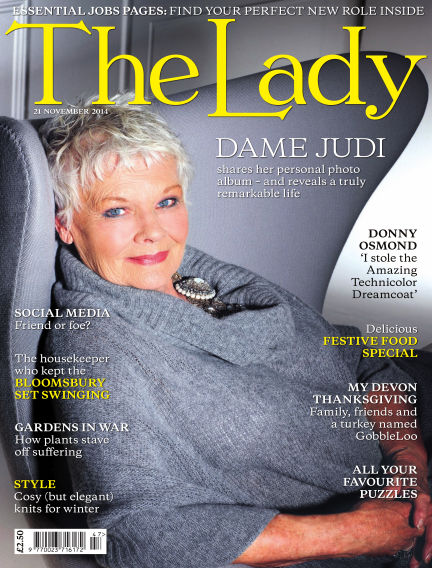 In this issue of The Lady : Not so long ago, I moved house. And during that
move, I found a cardboard box. And in that box,
I discovered a rather frayed, well-thumbed photo
album, long since written off as lost. My mother
had compiled it for my 21st birthday and it contained
images – some out of focus, many overexposed
(as most were in the 1970s and 1980s) –
of so many happy days, so many landmarks. It
didn’t matter a jot that the photos were tatty
or washed out; the fact that they were there at
all restored countless fading memories in
gloriously vivid Technicolor.
Which is why we are so fortunate this
week to be able to share some of Dame Judi
Dench’s personal photographs. These rarely
seen snapshots of her at work and at play pull
back the curtain on a truly remarkable life and enable us to see our
favourite screen and stage star as we have never seen her before.
Enjoy them on page 14.
We also have a stirring portrait of the modest housekeeper who
kept Charleston and the Bloomsbury set swinging; Michael Ball
on how he ended up working with his long-time heroine; and our
resident American-in-Devon Brianne Leary on how she has
brought Thanksgiving to her remote corner of the West Country
(it wasn’t easy, by the way).
And that’s just the amuse-bouche; there’s plenty more, too.
Happy reading.
Matt Warren, Editor

With Readly you can read The Lady (issue 21st November 2014) and thousands of other magazines on your tablet and smartphone. Get access to all with just one subscription. New releases and back issues – all included.
Try Readly For Free!
The Lady