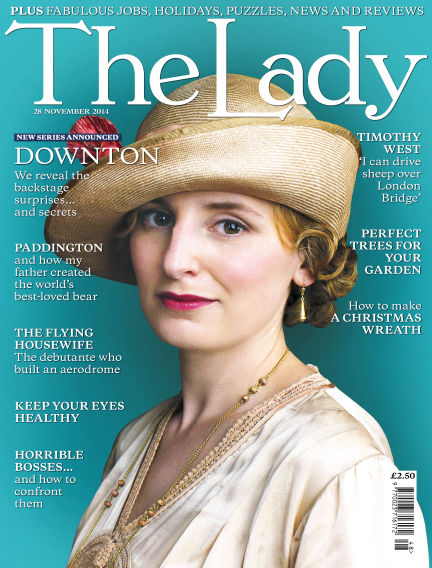 In this issue of The Lady : My first teddy – or at least the first teddy I remember
– was a Paddington. I remember particularly
his red rubber wellie boots and how they really
didn’t make him the softest of soft toys.
Well Peru’s most famous export has now,
finally, made it on to the big screen. And voiced
by Ben Whishaw – Colin Firth backed out of the
role earlier in the year – he is picking up some
rather fine reviews.
He has also attracted a little controversy,
with the British Board of Film Classification
awarding the film a PG certificate – owing to
some ‘mild sex references’. Golly. Well, we
won’t get into that, but on page 20, we do
have Paddington creator Michael Bond’s
daughter on how her father dreamt up Britain’s
best-loved bear.
As series six is announced, we also have a rare backstage
glimpse of Downton Abbey and the colourful characters who keep
things running smoothly behind the scenes, and a fascinating
audience with the daring debutante who built an aerodrome and
became known as the Flying Housewife.
We also teach you how to make your own Christmas wreath;
reveal how to deal with that tyrannical boss, and hear why actor
Timothy West has the right to herd sheep over London Bridge. I’m
only hoping that next time he does, he remembers to ask me along.
Very best wishes,
Matt Warren, Editor

With Readly you can read The Lady (issue 28th November 2014) and thousands of other magazines on your tablet and smartphone. Get access to all with just one subscription. New releases and back issues – all included.
Try Readly For Free!
The Lady