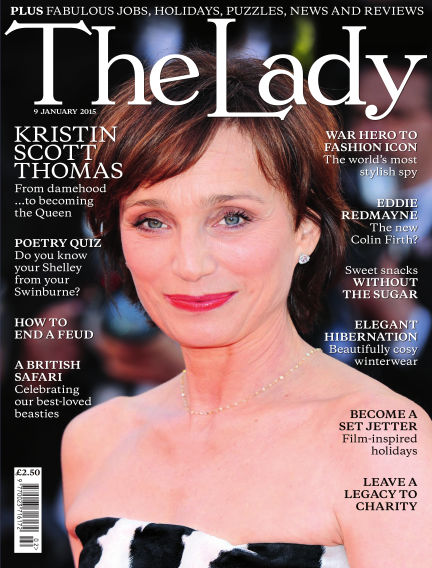 In this issue of The Lady : Some lives are stranger, more colourful, than fiction. If you look closely enough, I don’t doubt that most are. But Brian Stonehouse’s tale really is one to tell around a campfire or the dining- room table. Working as a British secret agent during the Second World War, he was parachuted into France with a suitcase radio and a poison pill. Eventually, he was captured by the Germans and sentenced to death, but survived five Nazi concentration camps, made it back to Britain, and became one of the world’s greatest fashion illustrators. He sketched luminaries from Queen Elizabeth, the Queen Mother to Richard Burton, and became a staple at American Vogue. You can read all about him on page 16.

We also have an audience with rising star Eddie Redmayne who is wowing the world with his turn as physicist Stephen Hawking in The Theory Of Everything and has recently married his real-life leading lady; our delightfully difficult (well, I thought so) poetry quiz, and one lady artist’s beautiful portraits of Britain’s best-loved animals.

And who could forget Kristin Scott Thomas, who has just been made a dame in the New Year’s Honours list and is this week’s The Lady cover star.

With Readly you can read The Lady (issue 9th January 2015) and thousands of other magazines on your tablet and smartphone. Get access to all with just one subscription. New releases and back issues – all included.
Try Readly For Free!
The Lady