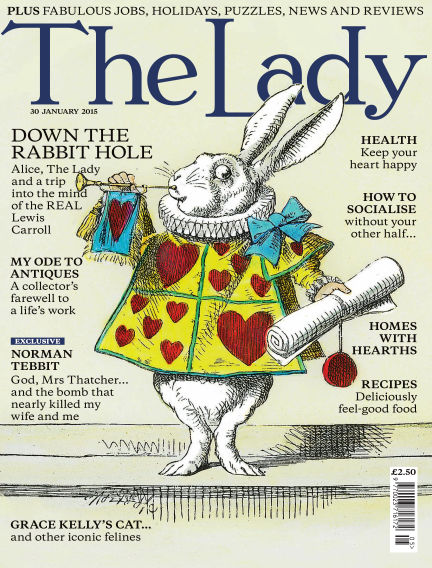 In this issue of The Lady : Dear Readers -
One hundred and thirty years is a long time. But in just a couple of weeks, The Lady will be celebrating its three score years and seventy.
Little wonder, then, that our archive is an historical treasure trove. In 1891, for example, celebrated Alice’s Adventures In Wonderland author Lewis Carroll – real name, Charles Lutwidge Dodgson – began compiling a devilish word puzzle for The Lady, called Syzygies. He was also a good friend of the magazine’s founder, Thomas Gibson
Bowles, and the two regularly wrote to one another. Dodgson’s letters to Bowles off er an intriguing glimpse inside the controversial author’s
mind and so on the 150th anniversary of Alice’s Adventures In Wonderland, we take a closer look at his correspondence and the man who took us down the rabbit hole. You can read all about it on page 12. We also have an exclusive interview with Norman Tebbit, who tells us about working with Margaret Thatcher, the IRA bomb that
nearly killed him and why he gave it all up for his wife; the dazzling pictures that show some of Hollywood’s most glamorous Golden Age stars… with their cats, and the moving account of a lifelong antiques collector who finally has decided to part company with his beloved treasures. Until next week,
Very best wishes,

With Readly you can read The Lady (issue 30th January 2015) and thousands of other magazines on your tablet and smartphone. Get access to all with just one subscription. New releases and back issues – all included.
Try Readly For Free!
The Lady