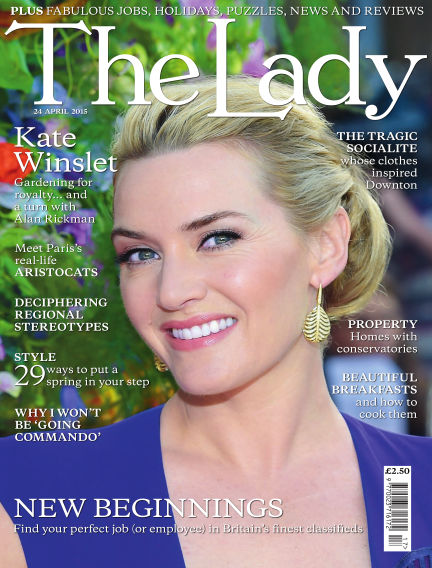 In this issue of The Lady : Dear Readers - We Brits have wide-ranging tastes, but it’s safe to
say that pets, gardens, costume drama and Alan Rickman are among the nation’s favourite topics. Well, actress Kate Winslet’s latest project – set in the court of the extravagant French Sun King, Louis XIV, offers plenty of the latter three, as she takes on the role of Sabine de Barra, the woman tasked with creating an opulent garden ballroom for the king. And yes, in case you’re wondering, Alan Rickman plays the king. Read all about it on page 16. We also have the dazzling tale of society girl Heather Firbank. In the 1920s, she wowed the world with her exquisite wardrobe – which went on to inspire the costumes in Downton Abbey – but her obsession with fashion ultimately cost her everything. There’s the hilarious VG Lee on ‘going commando’ – I’ll let
her explain; Thomas Blaikie on regional stereotypes (are West Country folk, like me, really all laid-back?), and if you want an extra helping of pets, look no further than page 20, where we offer a mesmerising glimpse into the lives of some of Paris’s best known
moggies. Well, we are the magazine with everything, after all. Until next week, Matt Warren, Editor

With Readly you can read The Lady (issue 22nd April 2015) and thousands of other magazines on your tablet and smartphone. Get access to all with just one subscription. New releases and back issues – all included.
Try Readly For Free!
The Lady