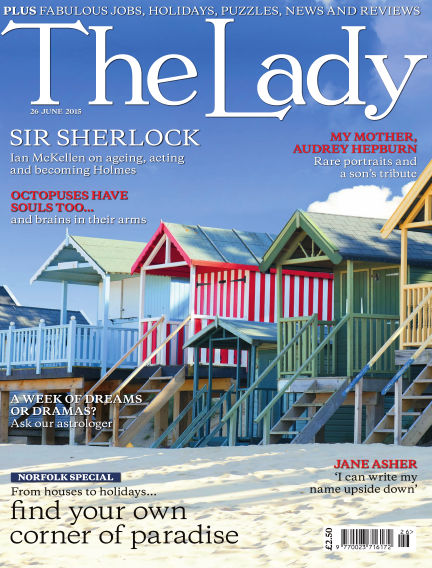 In this issue of The Lady : Dear Readers, We Britons don’t half love a detective. Just take a glance at the television listings, or the shelves creaking with crime at the local lending library. In fact, our love of cracking a puzzle probably
goes some of the way to explaining why this magazine’s Ladygram is so stupendously popular. But one super-sleuth trumps all others. He is the original caped crusader, the paragon of private eyes, the blueprint bloodhound. Yes, he’s Mr Sherlock Holmes. We really can’t get enough of him. In fact, he has just returned to the big screen in yet another cinematic adventure, this time played by the great Sir Ian McKellen, who speaks to us on page 16 about ageing, acting – and bringing the famous resident of 221B Baker Street to glorious life. We also have Audrey Hepburn’s son on his iconic mother’s very special relationship with London; a fascinating glimpse into the sensitive soul of the octopus, and our unmissable guide to one of our island’s most spectacular counties: Norfolk. So go on, dig in. It would be a crime to miss it. Very best wishes, Matt Warren, Editor

With Readly you can read The Lady (issue 26th June 2015) and thousands of other magazines on your tablet and smartphone. Get access to all with just one subscription. New releases and back issues – all included.
Try Readly For Free!
The Lady