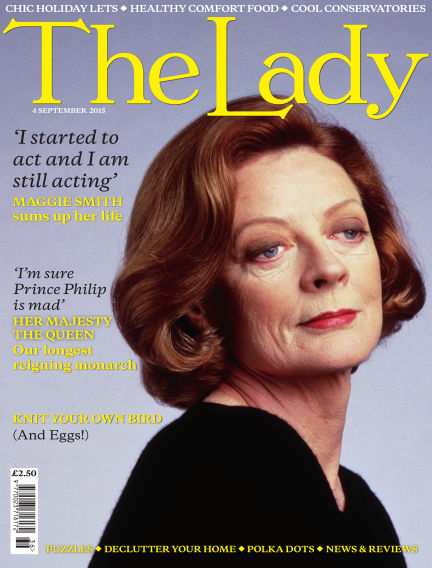 In this issue of The Lady : Dear Readers, On 9 September, Her Majesty the Queen will overtake her great-great-grandmother Queen Victoria to become our longest reigning monarch. Typically, it has been made known that she doesn’t want any fuss. Instead, she plans to spend the day opening the Scottish Borders Railway in the company of members of the Scottish
Parliament. If the Duke of Edinburgh is with her, we can at least look forward to the possibility of some amusing bon mots, because, as Thomas Blaikie reveals in his touching tribute, there is no shortage of wry humour in the Royal Household, nor is there ever any failure to properly honour the service and sacrifice of others. It was the Queen’s father, George VI, who pinned the George Cross on the tiny frame of four-and-a-half-year-old Tania Szabó in recognition of her mother’s heroic death during the Second World War. An honour, Tania tells us, which helped sustain her while growing up. In fact, this appears to be our week for paying tribute to stoics and none more so than Dame Maggie Smith. When her 80th birthday was tweeted seven million times, she told her biographer Michael Coveney that she nearly fainted. Inevitably she kept her cool and he reveals what makes her such an understated trouper. We also discover, finally, the solutions to our Ladygram Challenge. Were you one of the hundreds who entered? Did you get it right? Take a deep breath and turn to page 81. Until next week, very best wishes, Sam Taylor, Editor

With Readly you can read The Lady (issue 4th September 2015) and thousands of other magazines on your tablet and smartphone. Get access to all with just one subscription. New releases and back issues – all included.
Try Readly For Free!
The Lady