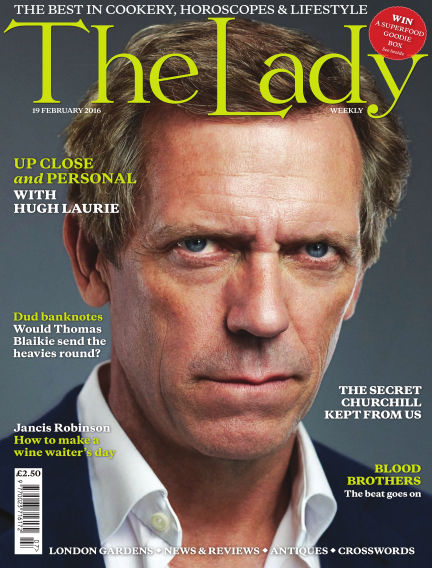 In this issue of The Lady : Dear Readers,
Very few can claim to have had as long, or as
event-filled, a life as Winston Churchill. As a
young man he took part in the last major British
cavalry charge, was taken prisoner reporting on
the Boer War and lived long enough to see man
embark on space travel and the world besieged by Beatlemania.
And, as a captivating new television film reveals, he also
survived several strokes, including, in
1953, a serious stroke from which he
never fully recovered, while serving a
last term as prime minister. Michael
Gambon plays him with dignity and
gravitas, applying the same attention
to detail he brought to his recent portrayal of the bumbling
Private Godfrey in the recent film of Dad’s Army.
Churchill’s secret was kept from the nation with the help of a
team of discreet doctors. Our cover star Hugh Laurie’s less than
discreet character Dr Gregory House may have seen his last
patient, but Laurie is never off our screens for long and returns
on Sunday as a baddie in search of secrets in a new John le Carré
TV spy thriller. I for one can’t wait, not least as I have long had a
blush-making crush on him. There, that’s my secret out!
Until next week, best wishes,
Sam Taylor

With Readly you can read The Lady (issue 19th February 2016) and thousands of other magazines on your tablet and smartphone. Get access to all with just one subscription. New releases and back issues – all included.
Try Readly For Free!
The Lady