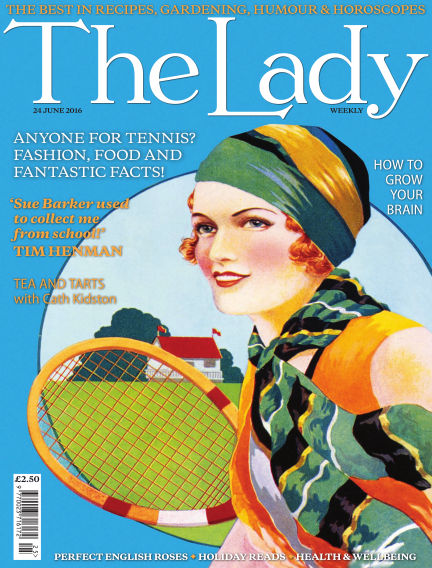 In this issue of The Lady : As Wimbledon fortnight beckons, British tennis
fans are bracing themselves for more nail-biting
viewing as Andy Murray pursues his dream of
a second championship title. Hopefully those
lucky enough to be present when Murray plays
will have the good taste to refrain from distracting shouts of
‘Come on, Tim’, an expression commonly used when someone
who, having started out well, is facing defeat. This phrase
refers back to former British tennis
star Tim Henman’s infamous 2001
Wimbledon semi-final defeat at the
hands of Goran Ivanisevic –
a match which dashed the hopes of
the nation. Talking to us this week,
Henman concedes that if he could replay one match from his
career, it would be that one – but he also describes with heartwarming
gusto the joys of parenthood and his new career as a
commentator. This capacity to put, if you will forgive the pun,
a positive spin on life is admirable, and one shared by the
amazing Nell Gifford, sister of Emma Bridgewater and owner
of possibly the poshest circus in the world. If offered a seat at
the Centre Court on Finals’ day or a chance to be ringside at
Giffords’ Circus, I’d be hard pushed to make the choice. But then
I’ve always been a pushover for a dancing horse...
Until next week, best wishes,

With Readly you can read The Lady (issue 24th June 2016) and thousands of other magazines on your tablet and smartphone. Get access to all with just one subscription. New releases and back issues – all included.
Try Readly For Free!
The Lady