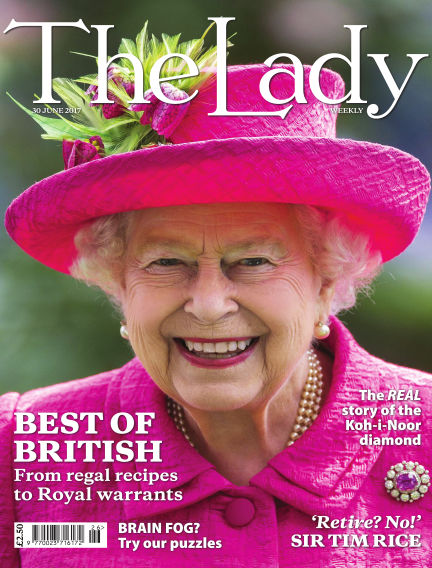 In this issue of The Lady : Dear Readers,
WIN: One of three copies of Sykes – The Complete Series on DVD
This week we celebrate the Best of British and who finer to have on our cover than HM The Queen. As ever, her beaming smile and serene demeanour have been a tonic during the distressing events of the past few months. She is, quite literally, the very Best of British. To
receive a royal warrant from Her Majesty, the Duke of Edinburgh
or the Prince of Wales is the highest endorsement someone can
receive. But how does a company get awarded one? And why? As we discover, it is a complex system of checks and balances that ensures
fair behaviour all round. Things are less clear-cut when it comes
to the priceless diamond, the Koh-i-Noor, which graces the Queen Mother’s crown. Writer Anita Anand reveals that intrigue, mystery, murder and romance are all tied up in its complex story. Thankfully, some things are less complicated, like the question of whether it would
be nice to live in one of the gorgeous manor houses in our homes
feature this week – generally the answer is a simple Yes! For musical fans, it is also an affirmative applied to anything written by Sir Tim Rice. But even for him, things are not always plain sailing. As he tells us, his latest musical has been 50 years in the making. After that, he surely deserves a holiday, and where nicer than Kent, the Garden of England? Maybe we should all go…
Until next week, best wishes
Sam Taylor, Editor

With Readly you can read The Lady (issue 30 June 2017) and thousands of other magazines on your tablet and smartphone. Get access to all with just one subscription. New releases and back issues – all included.
Try Readly For Free!
The Lady