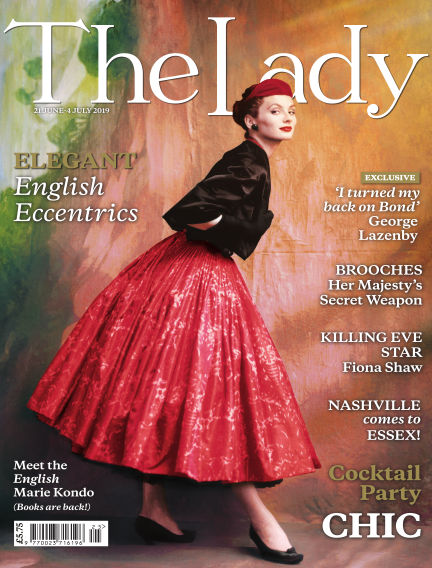 In this issue of The Lady : Dear Readers,

Eccentricity is something of a national trait. From aristocrats to artistic bohemians, as social historian Lyndsy Spence reveals, no one does
nuttiness as elegantly as an Englishwoman. Here at Bedford Street we have a long history of these glorious types. Sydney, Baroness Reesdale, daughter of The Lady’s founder Thomas Gibson Bowles, liked to sleep with a potato in her bed, while her unorthodox mothering skills produced the gloriously wacky Mitford Girls. We don’t just produce eccentrics of course, as our Best of British feature shows. We produce world-class products that stand the test of time.
The eternally handsome George Lazenby is best known for playing one of our greatest fictional heroes, James Bond. But just the once. Which, as he tells us exclusively, was very much his choice. James Crawford-Smith reveals how Her Majesty The Queen’s priceless brooch collection are also her secret message carriers, each one worn for specific meaning. Our devotion to animals is legendary and for author Amanda Brookfield her Golden Doodle was also a true friend who changed her life. And who else does gardens quite as well as us? At this time of year,
up and down the country, we are positively blooming. In fact, we
all deserve a pat on the back and a new frock from our stunning
summer cocktail dresses.
Until 5 July, best wishes,
Sam Taylor
Editor

With Readly you can read The Lady (issue 21st June 2019) and thousands of other magazines on your tablet and smartphone. Get access to all with just one subscription. New releases and back issues – all included.
Try Readly For Free!
The Lady