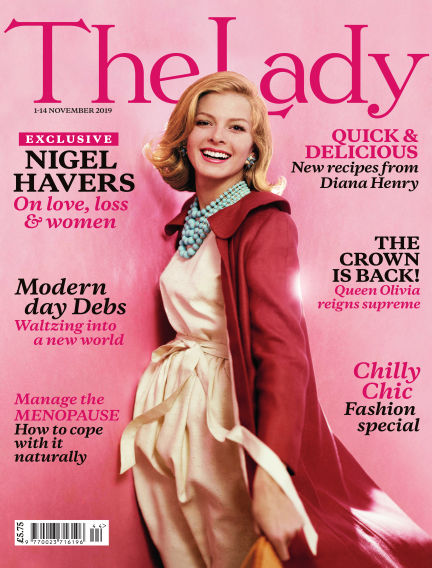 In this issue of The Lady : Dear Readers,
The saying “may you live in interesting times” is generally thought to be an age-old Chinese curse (although most experts now believe this to be a myth dreamed up in part by the American politician Robert Kennedy for a speech he gave in 1966).
We are certainly living through interesting times now. I’m trying to avoid the ‘B-word’ but there is no doubt that at present this is a country – and a world – divided. Is that anything new? Sadly not. But perhaps massive political and social change should not always be seen as a curse.
Thirty years ago, on 9 November 1989, the Berlin Wall fell, leading to the reunification of Germany. In this issue, acclaimed foreign
correspondent Colin Freeman reveals the extraordinary story of the seven-year-old girl who became one of the last people to escape from East Germany to the West and what the anniversary means to her.
The Duchess of Sussex seems to be coming in for equal amounts of
approval and opprobrium at the moment. Meghan says the British stiff
upper lip attitude may be damaging to mental health; our generationgap
writers take opposing sides. On a lighter note, Aindrea Emelife
reports on how debutante balls are no longer about finding a suitable
husband but are more like international networking events for
cosmopolitan women.
The actor Nigel Havers talks to Maureen Paton about his long and
varied career, including his regrets, and celebrates the changes he has
seen in his lifetime (warning: he does mention the B-word!).
This year has marked the centenary of the Treaty of Versailles and
this month we commemorate the millions who died in the First World
War and other conflicts. I have a close family member serving on the
front line and a great-uncle who won the Military Medal for bravery in
the Second World War. For both of them – and so many
others – we should remember the past, look to the future
and (perhaps) hope for interesting times.
Maxine Frith, Editor

With Readly you can read The Lady (issue 1st November 2019) and thousands of other magazines on your tablet and smartphone. Get access to all with just one subscription. New releases and back issues – all included.
Try Readly For Free!
The Lady