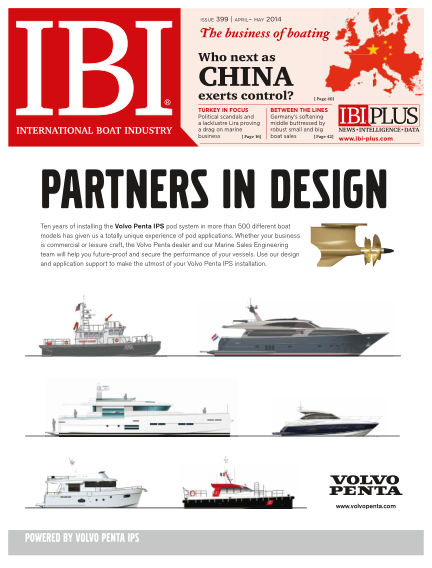 In this issue of International Boat Industry : It’s an Issue that won’t go away. What to do with boats when they reach the natural end of their life? Back in late January the scale of the problem was brought home during the European Boating Industry Conference in Düsseldorf. According to ICOMIA there are some six million boats in existence in Europe alone, a figure one supposes would be far exceeded in the US. Speaking at the conference, Pierre Barblou, president of French boat dismantling network APER, offered more worrying stats – 58% of the existing French feet was built before 1990, with 13,000 of them becoming End-of-Life boats each year. Until now most of those ‘End-of-Life’ boats find their way into landfill but this approach is increasingly seen as unsustainable – some countries are already restricting the disposal of GRP. So, recycling will become the only realistic option – but finding an economically viable way of turning old boats into useful materials has yet to be found. There are those who think that technology, as it so often does, will come to the rescue, but the clock is ticking and with each passing year more boats entering the feet only add to the scale of the problem. Ultimately, of course, it is within our best interests to cull the market of those dilapidated craft taking up marina berths and swinging moorings, the ones whose owners have long lost any interest in and yet cannot bring themselves to part with. But as with most things it all boils down to cost and who will pay. A number of options were discussed at the conference, not least an EU administered disposal tax on all boats or an ‘up front’ payment when the boat is purchased. Should boatbuilders bear some of the responsibility? Maybe a marine equivalent of the UK’s annual car safety inspection procedure would not come amiss with the demonstrably unsafe boats being mandatorily destroyed? As our industry picks itself up, the last thing anyone wants to hear is talk of new taxes and barriers to owner engagement. But we need to be more proactive if today’s problem isn’t going to turn into tomorrow’s crisis.