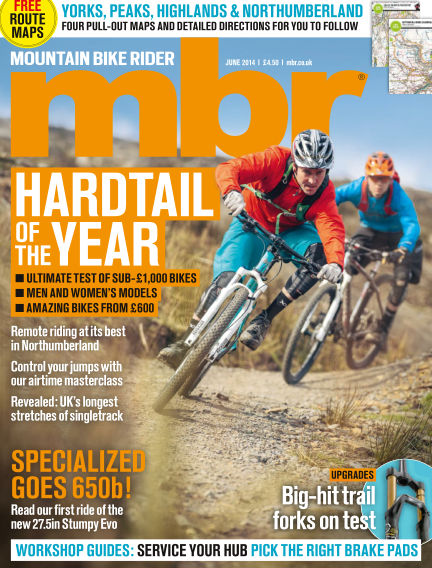 In this issue of Mountain Bike Rider : When I tell people I work for a mountain bike magazine, they usually ask the same question: “Do you get to test all the new bikes?” Much to their disappointment, my answer is “No”. I do ride bikes, and I do it when I’m supposed to be ‘working’. So yes, I’m a very, very lucky man. But do I test bikes? No. Because it’s a lot harder than it looks. When one of our testers rides a bike, they think about things like the performance of the fork and frame, the feedback they’re getting from the trail, the grip and speed of the tyres, the modulation of the brakes. All at the same time. When I ride a bike, I think things like, ‘oh my god this is amazing’, ‘I bet no-one has ever gone this fast on a bike before’ and ‘brake... BRAKE... BRAAAAAAKE!’ By the time I get to the base of a descent I’m too busy grinning like an idiot to have anything sensible to say about the bike. But if testing bikes is — surprisingly — also hard work, this month brings with it the toughest test of them all: Hardtail of the Year. Twenty bikes across three categories is a challenge that requires months of preparation, more than a week of solid testing, and an impressive if unwieldy cast of riders, photographers and videographers. This magazine built its reputation on tough, rigorous reviews, and we don’t skimp on any of it for Hardtail of the Year. Those £600 bikes are tested just as thoroughly as any flagship full-susser. If you’re in the market for a new hardtail, your buying dilemma is about to be solved — just turn to page 62. Simon, Editor MBR

With Readly you can read Mountain Bike Rider (issue June 2014) and thousands of other magazines on your tablet and smartphone. Get access to all with just one subscription. New releases and back issues – all included.
Try Readly For Free!
Mountain Bike Rider
TI Media LIMITED