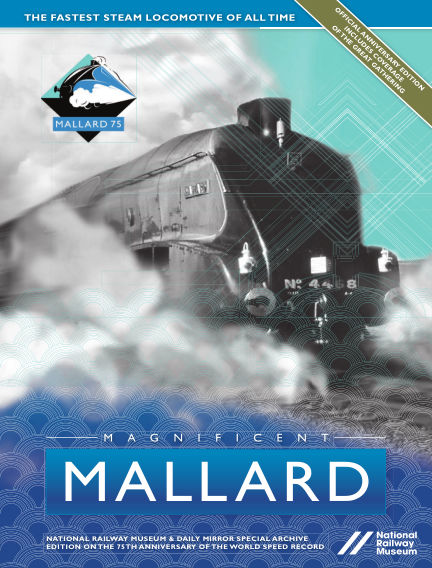 In this issue of Magnificant Mallard : It’s the fastest steam locomotive that has ever been built, an engineering masterpiece that is still a huge crowd-puller 75 years after its record-breaking run.

On July 3, 1938, Mallard clocked 126mph along the East Coast Main Line and broke the world steam speed record – one that still stands today.

On the 75th anniversary of that historic journey, the National Railway Museum and the Daily Mirror have teamed up to produce a special publication.

Magnificent­Mallard pays tribute to the people who turned the engine into a record breaker, from designer Sir Nigel Gresley to the driver who steered it into the history books.

Rare images from the archives help tell the fascinating story of Mallard and the development of the railways over the past 200 years, from Stephenson’s Rocket and Flying Scotsman to the trains we travel on today.

This magazine also celebrates this year’s much-heralded reunion of the six surviving A4 locomotives at the Great Gathering in York.

With Readly you can read Magnificant Mallard (issue Issue 01) and thousands of other magazines on your tablet and smartphone. Get access to all with just one subscription. New releases and back issues – all included.
Try Readly For Free!
Magnificant Mallard
TRINITY MIRROR PLC
Tweet