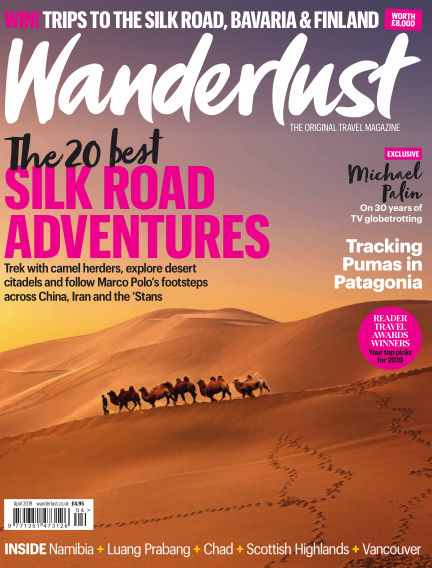 In this issue of Wanderlust Travel Magazine : Interview with Michael Palin
Comedy legend, actor and the man who changed TV travel shows for ever – we talk to Sir Michael Palin, winner of our Icon of Travel award, about 30 years on the road…
Patagonia
For most travellers, Patagonia’s Torres del Paine is all about the hiking. But as efforts to preserve its native puma bear fruit, you can now join altogether toothier companions in the wild
Reader Travel Awards
They’re the destinations you love, the tour operators you trust, the gear and guidebooks you won’t leave home without: meet this year’s Travel Awards winners, crowned by the best-journeyed bunch of all – Wanderlust readers
Namibia
Wildlife, dunes and vast starry skies – no wonder you voted it ‘Top Country’ in our Reader Travel Awards. We plot your perfect trip…
Gerewol, Chad
Around early October, the nomadic Wodaabe people gather in south-western Chad for Gerewol – a unique festival at which young men beautify themselves and dance through the night to win love
Silk Road
With epic scenery and a history to match, Central Asia’s vast ancient trading trail has re-captured travellers interest – as its placement on our Reader Travel Awards prove. Here are the best ways to take in its treasures
On diving with Japan’s Ama
‘Sea women’ have been freediving for shellfish off the coast of Osatsu for thousands of years, but the future of Japan’s ama divers is looking uncertain as a new generation fails to follow in their wake…
WIN
A trip to the tranquil Finnish Lakeland, worth over £4,000, a trip to Kyrgyzstan & Uzbekistan, worth over £3,000 and an adventurous mini-break in Ruhpolding, Bavaria, worth over £1,300
Plus… First 24 hours in Vancouver, Canada; a British break in the Scottish Highlands; Italian cuisine; Mont-St-Michel vs St Michael’s Mount; Go now, Pittsburgh; Dream sleeps off Norway’s coast; How to fly stress-free and lots, lots more…