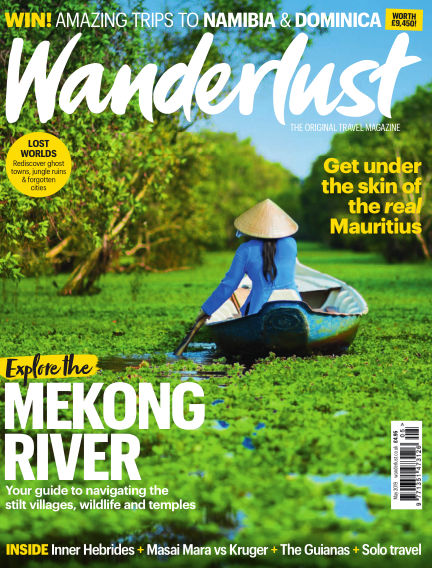 Interview with Alastair Fothergill
With his new natural history Netflix series, Our Planet, under way, the filmmaker explains why TV shouldn’t just show us the world, it should inspire us to change it…

The Inner Hebrides
Away from the increasingly busy Isle of Skye, the far reaches of the Inner Hebrides offer a glimpse of a long-forgotten Scotland – of bullish wildlife, crumbling priories and splendid isolation…

Mauritius
A new hotel in Mauritius is encouraging visitors to get out of their rooms and spend time with local artisans, people and projects, discovering a side to the honeymoon paradise that few witness

The Mekong
Winding its way down from the Tibetan Plateau to the South China Sea, the Mekong River brings together the best of Indochina old and new – explore stilt villages, mountain temples and more with our handy guide

The Guyanas
A trio of tiny nations linked by a cosmopolitan past, a lack of Spanish and the north-eastern fringes of the Amazon – travelling the Guianas reveals a side to South America that few ever see…

Stuart Forster goes to bear jail
Churchill’s ‘polar bear jail’ is like no other facility on the planet, but when your tiny Canadian town is inundated with hungry bears year-round, sometimes ‘a little stir’ may be what keeps them alive

WIN…
…an 11-night trip for two to Namibia, plus a bundle of amazing Osprey backpacks and packing cubes; a trip to the Caribbean island of Dominica, worth over £2,600 and four Gregory backpacks worth over £350

Plus… First 24 hours in Panama City; A short break in Girona; Cuisine from an Indian ocean island; The Kruger vs the Masai Mara; Go now, Charleston; Dream sleeps in an Andean hacienda, Ecuador; How to stay out of jail abroad and lots, lots more…