With Readly you can read Allied Fighters of WW2 and thousands of other magazines on your tablet and smartphone. Get access to all with just one subscription. New releases and back issues – all included.
Try Readly For Free!
Allied Fighters of WW2
Mortons Media Group Ltd

Allied air power was at the forefront of the battle against the Axis forces throughout the dark days of the Second World War. British, American and Soviet airmen took on highly-trained and deadly German, Italian and Japanese aces in aerial combat in conditions ranging from the deserts of North Africa to the far flung islands of the Pacific and the near-arctic conditions of the Russian steppe in winter. Allied Fighters offers more than 200 highly detailed full colour profiles from world renowned artist Claes Sundin, covering all of the war’s most famous single seaters - the Spitfire, Hurricane and Typhoon, the Mustang, Thunderbolt and Lightning, the Yak-1, MiG-3 and La-5, and many more. The markings of aircraft piloted by aces such as James ‘Johnnie’ Johnson, Richard Bong and Alexander Pokryshkin are meticulously reproduced, based on original photographs, alongside a wide range of schemes from every year of the war and every front. Offering a host of different colour schemes and detailed notes, this is indispensible reading for enthusiasts and modellers alike. 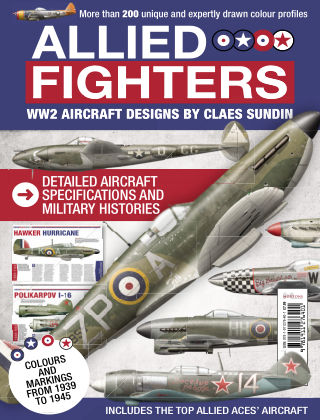