With Readly you can read Classic Road Tests and thousands of other magazines on your tablet and smartphone. Get access to all with just one subscription. New releases and back issues – all included.
Try Readly For Free!
Classic Road Tests
Mortons Media Group Ltd

The series of articles in Classic MotorCycle Mechanics called the MIRA Files originated from an idea that had been germinating for a couple of months towards the end of 2000. My archives of material from when I’d worked for Motor Cycle, the weekly newspaper, in the 1970s contained data from the performance testing I’d carried out at the Motor Industry Research Association’s proving grounds near Nuneaton in the Midlands. While this data had been used to create the performance panels that were part of the road tests, there was much that hadn’t been used and more importantly hadn’t been put into much of a comparative context. So why not publish a series of articles that featured how the motorcycles of the 1970s, the lifeblood of Classic Motorcycle Mechanics and its readership, actually performed when they were new? Editor at the time Bob Berry liked the idea as an extension of my previous contributions, and so the first of the series appeared in the January 2001 issue, featuring one of the most celebrated superbikes of the era, the Honda CB750 Four. And the series continued, month by month, supported by pictures of the motorcycles of that period, providing an alternative insight into the classic period when the Japanese factories were becoming dominant in every sector of the industry... 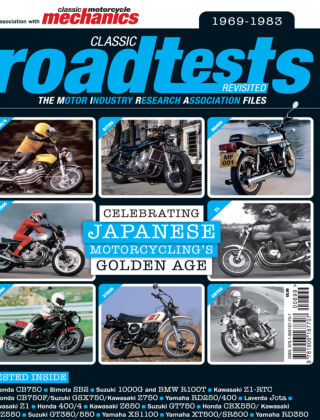