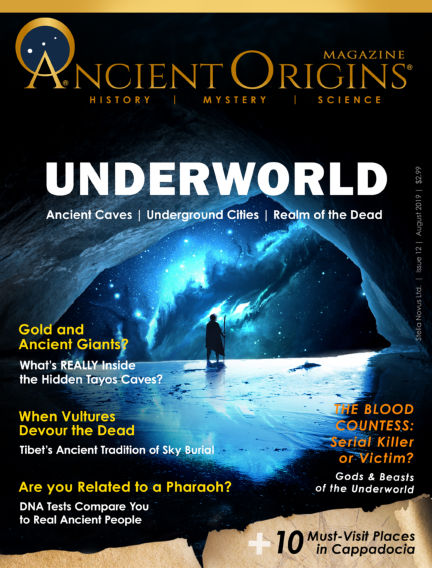 In this issue of Ancient Origins Magazine (History, Mystery and Science) : Every corner of the Earth has now been mapped, photographed, measured and scanned and— courtesy of Google—we can explore every inch of it, from the streets of Rome to the jungles of Guatemala. But beneath our feet is a world that remains largely unseen. Google’s cameras have yet to reach the subterranean world – the endless tunnels, caves, caverns, and even cities! Perhaps that’s what makes ‘the underworld’ so captivating. It’s a little slice of our planet that remains hidden, silent, and mysterious. Caves have always held an attraction for humans. They have witnessed our evolution, serving as shelters, homes, refuges, and strongholds. But beyond physical need, those dark and silent spaces have served as a gateway to the ‘otherworld’. In ancient legend and mythology, they are places where the dead cross to the afterlife, and where gods and beasts dwell. In this issue, we escort you through the deepest realms, journeying to the underworld and visiting the dark places where humankind first left their mark.