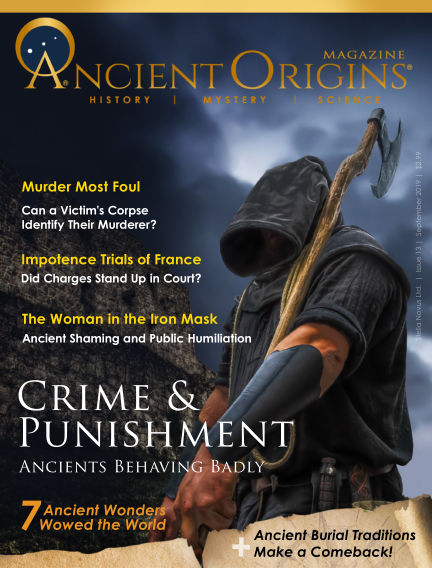 In this issue of Ancient Origins Magazine (History, Mystery and Science) : In ancient times, the typical response to crime was revenge, and blood feuds between families, communities, and even nations could endure for centuries. Nearly 5,000 years ago, King Hammurabi of Babylon made the first known steps in history towards establishing a code of laws that would reduce crime and put a stop to the endless blood feuds, and in those days, “an eye for an eye” was the way to go. Since then, humanity has attempted to grapple with crime and establish law and order, sometimes succeeding, and at other times failing miserably. But we must look on the bright side; nowadays women are no longer forced to wear metal mule masks for gossiping, men are not required to prove their ‘equipment’ works in divorce courts, thieves don’t get their noses sliced off before being sent to a city of noseless criminals, execution is no longer at the pointy end of a kangaroo bone, and a person’s guilt does not hinge on the way they chew their rice! In this issue, we explore these bizarre and surprising approaches to justice and punishment in the ancient and medieval world, and much more.