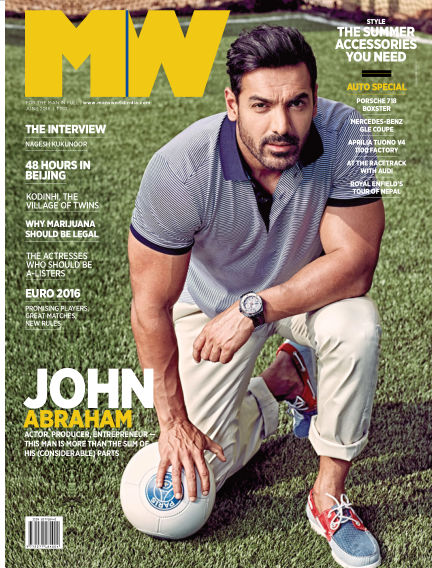 In this issue of MW : CAPTAIN OF HIS SHIP: Whatever John Abraham loves, he literally owns — cars and motorcycles, a football team, a production house and soon, a fitness venture. Euro 2016: Seven players to watch out for Ronaldo, Bale and Ibrahimovich will undoubtedly headline the tournament, but you’d do well to keep an eye on these young guns too. Euro 2016: Rules are rules: Come June 10 and football will see a whole new set of rules being implemented at the European Championships — over 90, in fact. Euro 2016: Euro at its best We recount six of the greatest Euro matches ever played. Too good by half Ad man Kishore Manohar and writer Judy Balan teamed up to write Half Boyfriend, a parody of Half Girlfriend, by you-know-who. The many flavours of
Marathi cinema The commercial and critical success of Sairat points to Marathi cinema’s ability to consistently renew its creative energy. Always the bridesmaid,
never the bride Why are some very talented actresses, who have everything going for them, unable to crack the big league?

With Readly you can read MW (issue June 2016) and thousands of other magazines on your tablet and smartphone. Get access to all with just one subscription. New releases and back issues – all included.
Try Readly For Free!
MW