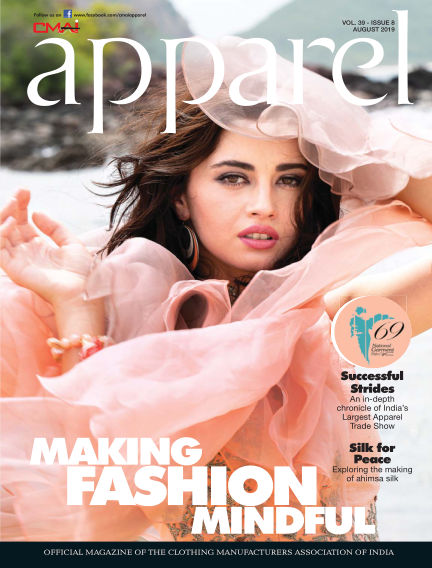 In this issue of Apparel : The 69th NGF, held from July 15 to July 18, 2019, materialised successfully, and was met with an overwhelming response from both buyers and exhibitors. Apparel’s August issue carries in-depth chronicles of the same.
To begin with, the ‘69th NGF Special’ segment consists of an array of reports, including one that takes readers through all four days of the Fair in an elaborate manner; another report talks about the Business Networking Sessions, along with a feature on how Udaan, India’s pioneering B2B portal and title sponsor of the 69th NGF, fared at the event. The issue consists of a quotes aggregated from various Exhibitors, who lend us their take on the Union Budget 2019–2020, whether it will impact their businesses, and how. A delightful spread of glimpses from the Fair also takes its place in this issue. We also present an interview with Mr Rahul Mehta, President, CMAI, who opens up about this edition of the Fair, the changes and challenges experienced by the Fair’s Managing Committee, and their hopes for the industry. Under ‘Report’, we write about a seminar held by CMAI’s Western Regional Committee in Pune.
Under ‘CMAI Capsule’, we put down all the developments and announcements that CMAI wants its members to know of. Our August issue is rightly titled ‘Making Fashion Mindful’, as we shine the spotlight on those who are steadfastly striving to make the fashion and apparel industries kinder and more humane.
In the ‘Feature’ section, we explore chikankari embroidery and how it is faring today. In ‘Fabric Speak’, we dig deeper into the making and nuances of ahimsa, i.e. non-violent silk. Under ‘Designer Spotlight’, we profile Soham Dave, who is known for his minimalistic yet sharp silhouettes crafted with eco-friendly processes.
The ‘Regulars’ segment consists of the important news and events, talked-about brands, trending collections, as well as forthcoming events in the world of apparel.

With Readly you can read Apparel (issue August 2019) and thousands of other magazines on your tablet and smartphone. Get access to all with just one subscription. New releases and back issues – all included.
Try Readly For Free!
Apparel
Spenta Multimedia Private Limited
Tweet