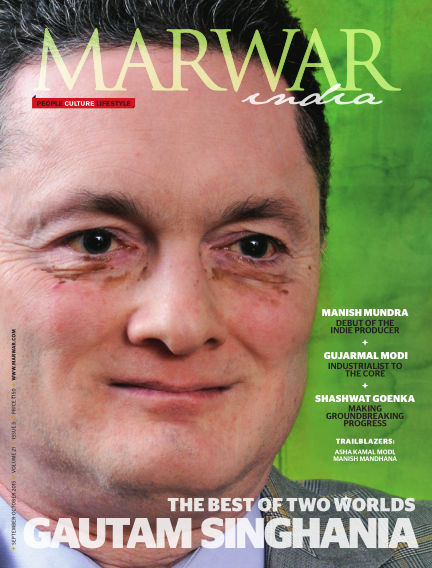 In this issue of Marwar : Highlighting the community’s penchant for all things luxurious, Marwar’s Wedding Special issue brings you a rundown of four of the most luxurious wedding destinations in the country. An affair as extravagant as a Marwari wedding is incomplete without spectacular bridal jewellery, and therefore, we also talk to three connoisseurs from the Marwari community to find out what the top picks of the season are.

Moving on to the world of business, we feature Gautam Hari Singhania, the Chairman & Managing Director of Raymond Limited who has his eyes set on a new milestone—the 2015 Ferrari Challenge Europe Championship. Equally riveting is the profile on young turk Shashwat Goenka, who took up the challenge of turning around the loss-making Spencer’s Retail Ltd (the retail chain of the RP-Sanjiv Goenka Group) in 2013. Two years later, Spencer’s seems to be hitting its stride with large format stores and a new strategy. Side by side, we continue to trace the community’s entrepreneurial dexterity with a story on Manish Mandhana of Mandhana Industries Ltd, a company that began as a textile trading business over three decades ago.

Bringing you the best and the most exclusive from the world of entertainment is our exciting feature on producer Manish Mundra, who, fresh from the success of his latest film Masaan at the Cannes Film Festival, talks to us about his foray into the world of cinema, his production house Drishyam Films, and the future of indie movies in India. We round off the issue with a first-person account by celebrated jewellery designer Asha Kamal Modi, who has come a long way to establish her globally acclaimed brand, Art Karat.

With Readly you can read Marwar (issue Sep-Oct 2015) and thousands of other magazines on your tablet and smartphone. Get access to all with just one subscription. New releases and back issues – all included.
Try Readly For Free!
Marwar
Spenta Multimedia Private Limited
Tweet