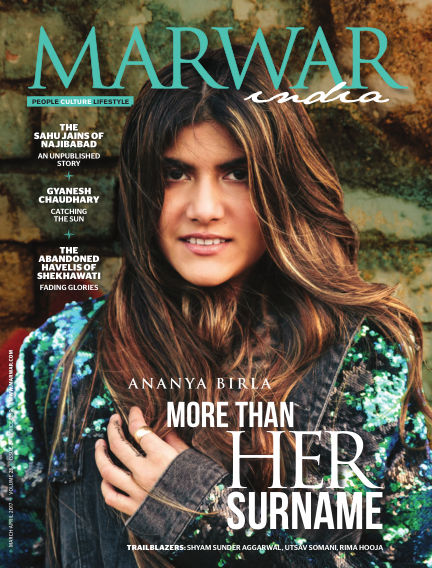 In this issue of Marwar : One of the many admirable qualities of Marwaris is the ability to perpetuate the successes of previous generations, which comes from a resolute will to prove one’s worth and ability, before taking helm of the family business. With two start-ups and an international music single to her credit, Ananya Birla likewise proves her resolve to carve her own identity, rather than bask in the glow of a surname or be overshadowed by inheritance. We have dedicated our cover to the all too famous daughter of industrialist Kumar Mangalam and Neerja Birla, who at 22 holds promise of making her parents proud by treading a different path.
Despite its forbidding climate and terrain, Rajasthan, the land of kings, is replete with stories of fabled maharajas and the grand forts and palaces they built. Lest they fade from our collective memory, Shriji Arvind Singhji Mewar, the 76th custodian of the House of Mewar, on his part, has spared no effort to keep the fascinating heritage of the House of Mewar alive.
Among London’s major tourist attractions is Madame Tussauds, a wax museum that immortalises famous personalities through life-like wax sculptures. But thanks to the efforts of Anoop Srivastava, the founder-director of Entertainment 7 Creative Ventures Pvt Ltd, one does not need go to London anymore to experience the charms of Madame Tussauds. Srivastava’s newly opened Jaipur Wax Museum replicates them with a captivating collection of Rajasthan’s royals and famous personalities from the fields of history, cinema, sports, literature and culture.
In our tribute section, we have unravelled the story of the Sahu Jains of Najibabad, especially the iconic Sahu Shanti Prasad Jain and his brother Sahu Shriyans Prasad Jain, whose entrepreneurial acumen and sustained efforts to build a business empire shows through a number of leading business houses, of which The Times of India Group stands the tallest.

With Readly you can read Marwar (issue March-April 2017) and thousands of other magazines on your tablet and smartphone. Get access to all with just one subscription. New releases and back issues – all included.
Try Readly For Free!
Marwar
Spenta Multimedia Private Limited
Tweet