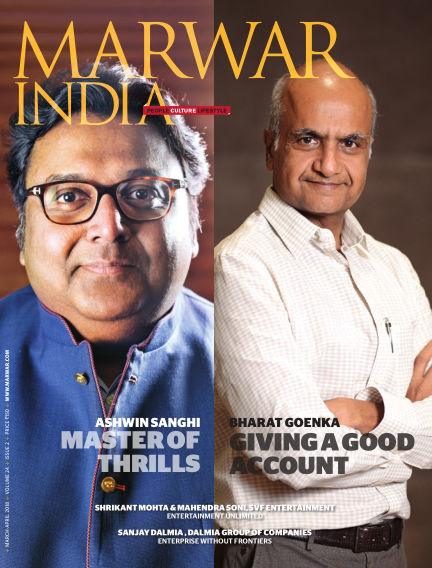 In this issue of Marwar : Marwaris are known for their entrepreneurial skills and hardwired business sense. This has helped them build great businesses around the world. But that is as far as tradition goes. It’s a different matter with the modern Marwari, however, many of whom have taken their interests beyond the boardroom in pursuit of other conquests. One among them is writer Ashwin Sanghi, who within a short span of time has earned global name and fame with a series of bestselling novels. We have dedicated our cover to the maestro of fiction thrillers. In what started as a start-up, the brand has seen incredible growth under father-son duo Shyam Sunder and Bharat Goenka and looks to conquer new grounds with scion Tejas Goenka stepping in. We bring you the inspiring story of the Goenkas. There’s no arena where Marwaris don’t seem to have made their mark as entrepreneurs. Read about cousins Shrikant Mohta and Mahendra Soni, whose passion for cinema led them to fly to Mumbai, as college kids no less, to make their foray into filmdom, and succeed against all odds. Their company, SVF Entertainment is now the biggest entertainment powerhouse in Eastern India. We bring you their inspiring story of heritage and style, and as keepers of a 150-year legacy, the Nahetas of Jaipur Jewels have been making concerted efforts to both popularise and perpetuate these traditional forms of jewellery. Also Mr. Sanjay Dalmia, the chairman of a clutch of Dalmia group companies, deserves special mention, whose interests, apart from spearheading the group’s growth, spill on to other domains such as India’s economic growth, patriotism and humanitarianism.

With all this and more, we bring you another interesting issue of MARWAR.

With Readly you can read Marwar (issue March - April 2018) and thousands of other magazines on your tablet and smartphone. Get access to all with just one subscription. New releases and back issues – all included.
Try Readly For Free!
Marwar
Spenta Multimedia Private Limited
Tweet