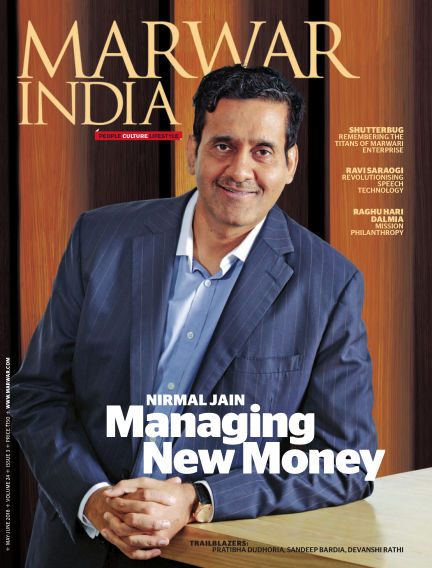 In this issue of Marwar : Apart from Marwaris’ well-known acumen and penchant for business, there are other factors which have contributed to the community’s success in enterprise. One among these is spotting the right opportunity, at the right time and the right place and making the most of it. This factor has significantly contributed to billionaire Nirmal Jain’s success, whom we have featured on our cover this issue. Starting from scratch, the founder and chairman of IIFL Holding Ltd has built one of the country’s most successful financial conglomerates in a mere span of 23 years, making his story one of most inspiring in the post-liberalization era.

In September last year, Marwar celebrated the launch of A Tribute to Titans – The Founding Fathers of Marwari Enterprise, which pays tribute to iconic pioneers of Marwari enterprise. The coffee-table book has now been presented in New Delhi with equal fervour and fanfare, with the crème de la crème of the city in attendance. We bring you glimpses of the glittering evening.

In similar vein, we bring you excerpts from Dr D K Taknet’s book The Marwari Heritage in which the director of the International Institute of Management and Entrepreneurship, Jaipur, has exhaustively chronicled the evolution of Marwaris from desert dwellers to industry leaders.

We are featuring Young Turks like Ravi Saraogi of Uniphore Software Systems. Yet another Young Turk who seems to be making waves is Aayush Agrawal, the 29-year-old director of Lenexis FoodWorks, whose flagship F&B venture, Wok Express, serves pan-Asian gourmet food in the ‘quick service restaurant’ format.
Thanks to its rainwater harvesting and groundwater management initiatives, among others, the once parched Chirawa village block in Rajasthan has not just seen a turnaround, but now also is a role model for others. We bring you the inspiring story.

With all this and more, we bring you another interesting issue of Marwar.

With Readly you can read Marwar (issue May - June 2018) and thousands of other magazines on your tablet and smartphone. Get access to all with just one subscription. New releases and back issues – all included.
Try Readly For Free!
Marwar
Spenta Multimedia Private Limited
Tweet