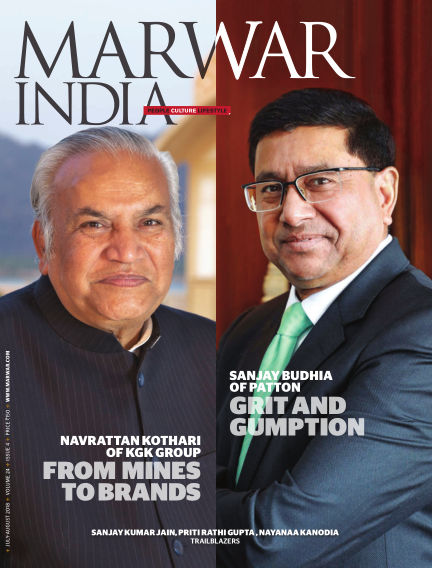 In this issue of Marwar : As one of the world’s largest gem processing hubs and a leading foreign exchange earner, the Indian gems and jewellery sector holds much promise for both the economy as well as the global jewellery market. This especially augurs well for organised players like the KGK Group, which has seen exponential growth over the last few decades under group patriarch Navrattan Kothari, whom we have featured on our cover this issue.

Marwari industrialists Mr. Sanjay Budhia, whose hard work, commitment and dedication has taken the Patton Group to great heights of success. We have profiled the plastics and engineering products giant.

Marwaris and cotton share almost an inseparable bond with both pioneering industrialists as well as present-day players having made a pile dealing in the time-tested commodity. We bring you the story of one such entity, T T Limited, which has grown manifold through the efforts of its managing director, Sanjay Kumar Jain.

Priti Rathi Gupta, daughter of Anand Rathi, the founder of Anand Rathi Group, is an example of Marwari women are seen today joining their male counterparts to take the family business forward. Not only has the scion of the financial services giant proved her mettle by founding the group’s commodities and finance wings, but also balances work with her role as a daughter-in-law, wife and mother with aplomb.

Away from the world of enterprise, we bring you the story of economist-turned-painter Nayanaa Kanodia, whose L’Art Naif genre paintings have earned her both name and recognition. Kanodia’s works are a unique mix of colour, exuberance, energy, preposterousness and satire that put her in a league of her own.

With the wedding season knocking on the doors, it’s time once again to take a look at what the jewellery market has on offer this year. In a trend story, we bring you tips from top jewellers to clue in this year’s brides-to-be on how to turn their special day into a glittering, fairy-tale affair.

With Readly you can read Marwar (issue July-Aug 2018) and thousands of other magazines on your tablet and smartphone. Get access to all with just one subscription. New releases and back issues – all included.
Try Readly For Free!
Marwar
Spenta Multimedia Private Limited
Tweet