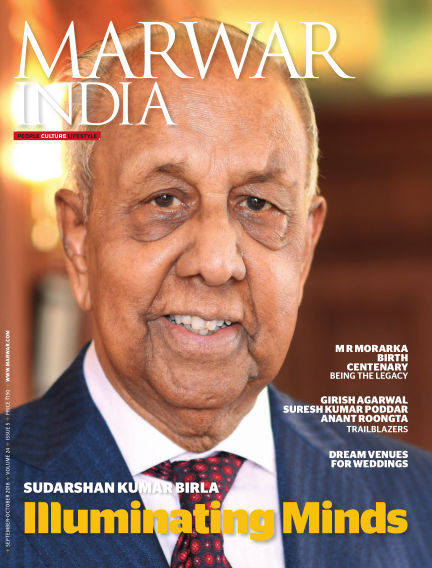 In this issue of Marwar : Just as much as the Birlas are a byword for wealth and industrial power in India, they are known for their philanthropic initiatives, especially in the area of building educational institutions, which led to the creation of the Birla Education Trust in the early twentieth century. Almost a century later, the Birla Education Trust continues to spread illumination through world-class educational institutions under Birla clan member and founder of the S K Birla Group, Sudarshan Kumar Birla, who now manages its affairs. We have featured the veteran industrialist-turned-educationist and philanthropist on our cover this issue.

Recalling the rich business legacy left by yet another pioneering industrialist, we have featured late Mahavirprasad Ramkumar Morarka in a tribute article, whose birth centenary we celebrate this year.

With its myriad shades and nuances, the sand dunes of the Thar never cease to mesmerise the onlooker, as was discovered by avid lensman Girish Agarwal, who is also the promoter director of the Dainik Bhaskar Group. In an interesting photo essay, Agarwal brings to life the musings and the rhythm of the desert during his sojourn that coincided with the famous Pushkar Mela.

Coming back to enterprise, we take you back to a time when synthetic leather was beginning to make rapid inroads into the market as a substitute for real leather. Among those to seize the opportunities that the sector provided was Suresh Kumar Poddar of Mayur Uniquoters Limited. Read our profile story on the dynamic entrepreneur who has scripted an incredible journey of fame and success to make Mayur Uniquoters one of the largest manufacturers of synthetic leather in India.

There’s no age limit when it comes to making one’s mark in life, as homemaker-turned-artist Sushma Jain has just proven. In an inspiring article, we bring you the story of Jain who has just had her very first solo art show in Mumbai, at the age of 60!

With Readly you can read Marwar (issue Sept - Oct 2018) and thousands of other magazines on your tablet and smartphone. Get access to all with just one subscription. New releases and back issues – all included.
Try Readly For Free!
Marwar
Spenta Multimedia Private Limited
Tweet