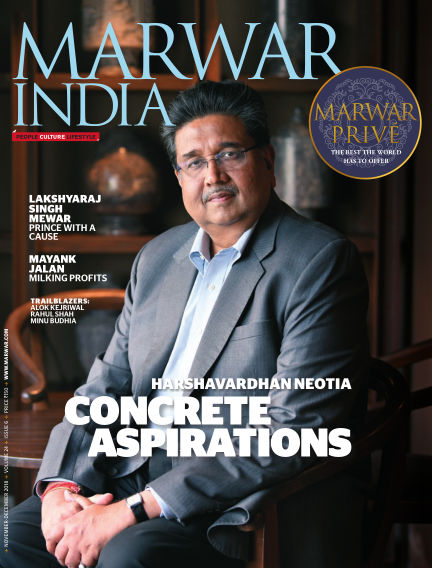 In this issue of Marwar : We bring you Mr. Harshavardhan Neotia, who has demonstrated rare mettle and resourcefulness by changing family legacy to a create business empire of his own. We have featured the Kolkata-based real estate baron on our cover this issue, who, as the chairman of the Ambuja Neotia Group, has literally changed the way the city lives and conducts business through his numerous projects.

Yet another Kolkata-based entrepreneur who has been creating ripples in entrepreneurial circles is Mayank Jalan of Keventer Agro Limited. As the next generation of a rapidly growing business house, Jalan has not just restored Edward Keventer’s Eastern India business—which the Jalans now own—to its former glory, but also turned his company, Keventer Agro, into a `1,000 crore entity, starting from scratch.

We also bring you the story of realtor Rahul Shah, scion of the Mumbai-based Sumer Group.

Even as Marwaris continue to take their businesses to every corner of the world, in Rajasthan, the land of their origin, the scion of the royal House of Mewar, Lakshyaraj Singh Mewar too has been proving his calibre as an entrepreneur.

Philanthropy actually has been a defining facet of the Marwari ethos from times immemorial, and while examples are many, one person who deserves special mention is Minu Budhia, wife of Kolkata-based industrialist Sanjay Budhia.

Thanks to their affluence and increasing global exposure, there is growing number of Marwaris today whose refined tastes and sense of understated elegance has fueled a thriving market for the most luxurious products and services.

In keeping with Marwari’s tastes and aspirations, we have introduced a new section from this issue onwards titled ‘MARWAR PRIVÉ’ which brings you the very best that money can buy.

A case in point is industrialist Gautam Singhania’s newly introduced Raymond Atelier that promises to be the ultimate destination for connoisseurs of bespoke fashion.

With Readly you can read Marwar (issue Nov-Dec 2018) and thousands of other magazines on your tablet and smartphone. Get access to all with just one subscription. New releases and back issues – all included.
Try Readly For Free!
Marwar
Spenta Multimedia Private Limited
Tweet