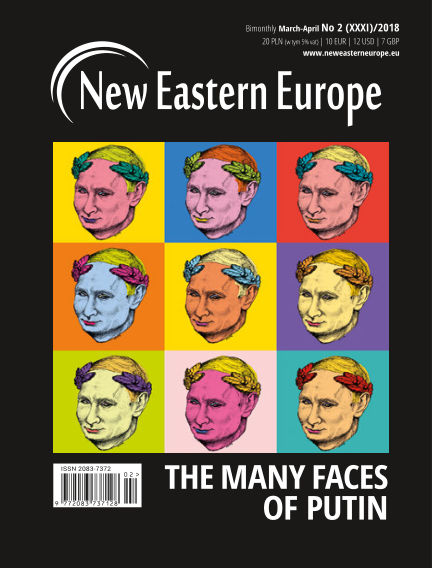 In this issue of New Eastern Europe : Over the last 18 years, together with the Russian people, the world has experienced the many faces of Vladimir Vladimirovich Putin. We have seen how the Russian president brought stability to the country following the volatile 1990s. We witnessed the internal struggles with Putin taking on rogue oligarchs and crushing the Chechen independence movement. In the mid-2000s, we saw a growing authoritarianism take hold and a Kremlin unafraid to crack down on its staunchest critics. At the same time, Russia took advantage of high oil prices, invested in modernisation and forged a system that made it nearly impossible to exist without Putin at the helm.

In international relations Putin presented his view of the world in Munich 2007, when he said that “the unipolar model is not only unacceptable but also impossible,” and “it is obvious that NATO expansion does not have any relation with the modernisation of the Alliance itself or with ensuring security in Europe”. The consequences of these words played out a year later in 2008 during the Russian-Georgian War. Following the failed reset in relations with the United States we then saw a brazen Russia break international law in 2014 with the annexation of Crimea and the direct support of separatists in eastern Ukraine. Russia’s campaign in Syria, the first time its military was deployed outside the region since the collapse of the Soviet Union, is an attempt to show the world that it is more than just a regional player – it wants to be recognised as a global power. Lastly, interference in western democracies was meant to show that the liberal democratic order was now defunct.

These are the faces of Putin that we know. It remains to be seen what face will emerge with the start of the next term. Is this truly his last six years in office? What will the search for a successor entail? Can the Putinist system survive as Russia struggles with a slow-growing economy and continued sanctions from the West? And what will it take for a real opposition to emerge? These are the questions that our authors explore and attempt to answer. No one knows for sure what is in store for Russia during these next four years. Certainly, whatever direction the developments take, they will have a much broader-reaching effect. And that is why it is important to understand Russia, the Russian society and the power structures with a single leader at its core.

With Readly you can read New Eastern Europe (issue 2/2018) and thousands of other magazines on your tablet and smartphone. Get access to all with just one subscription. New releases and back issues – all included.
Try Readly For Free!
New Eastern Europe
KOLEGIUM EUROPY WSCHODNIEJ IM.JANA NOWAKA-JEZIORAŃSKIEGO WE WROCŁAWIU
Tweet