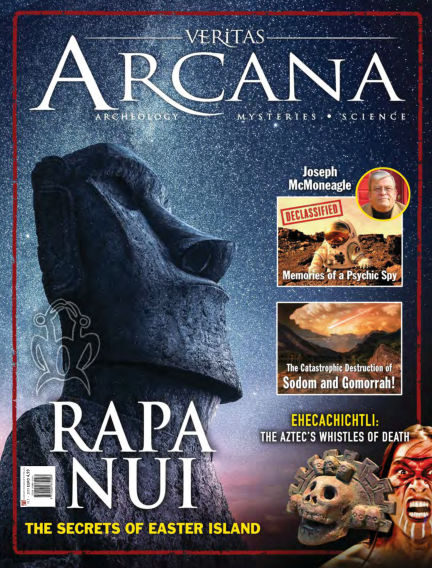 In this issue of Veritas Arcana - EN : In this new english issue of our swedish digital magazine we will discuss the Mistery of Rapa Nui and the Moai, the giant stone guardians of Eastern Island.
The catastrophic destruction of Sodom and Gomorrah! Was God to destroy the city of Sins a comet or a meteor from the sky? “Then the Lord rained down burning sulfur on Sodom and Gomorrah—from the Lord out of the heavens. 25 Thus he overthrew those cities and the entire plain, destroying all those living in the cities—and also the vegetation in the land. 26 But Lot’s wife looked back, and she became a pillar of salt.” A very interesting interview with Megan Lewis and Joshua Bowen, the leaders of Digital Hammurabi Project, born to promote the Mesopotamia culture all over the world. Ehecachichtli: the aztec’s Whistles of Death, the scream of thousand souls. How the sound of whistles was used by aztecs warriors to spread fear in the enemie’s mind, a real psycological warfare. Declassified: a series of CIA secret document are now declassified. One document reveals the remote viewing session in which Jospeh McMoneagle, the most important american psychic spy, saw a catastrophic event on Mars, that killed thousend of people? Fact or fiction?
Astrobiology, we are not alone in the universe! Professor of philosophy, Susan Schneider of the University of Connecticut and the Institute for Advanced Studies in Princeton, shocked the world saying: “Alien cyborgs are real! And they are billions of years old!”

With Readly you can read Veritas Arcana - EN (issue 2019-05-21) and thousands of other magazines on your tablet and smartphone. Get access to all with just one subscription. New releases and back issues – all included.
Try Readly For Free!
Veritas Arcana - EN